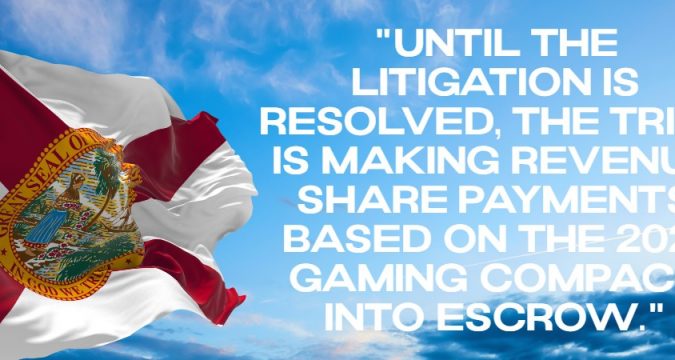 The Seminole Tribe of Florida last week stopped paying installments on the $500 million in yearly revenue sharing agreed upon in its 2021 gaming compact with the state.

The owners and proprietors of six casinos in Florida – two of them Hard Rock International properties – had gained the right to offer state-wide mobile and retail sports betting, craps, and roulette in a deal negotiated with Gov. Ron DeSantis. It was approved in a special session by the State Legislature.

But after a month of accepting mobile bets through its Hard Rock Digital app, the Tribe was forced to suspend service when a series of lawsuits by rival gambling interests gained traction.

US District Court Judge Dabney Friedrich invalidated the Compact in November, saying the mobile component went beyond the scope of the Indian Gaming Regulatory Act although the Department of the Interior asserted otherwise in tacitly granting approval of the deal in August.

Laws governing gambling in Florida reverted to the 2010 compact between the Seminoles and the state.

In a statement to the media, Seminoles spokesperson Gary Bitner said the payments would be paid into an escrow account.

“The Governor, the State of Florida and the Seminole Tribe continue to work together closely to defend the 2021 Gaming Compact in the litigation pending in the DC Circuit Court of Appeals, just as they did when it was challenged in the U.S. District Court in Tallahassee. Until the litigation is resolved, the Tribe is making revenue share payments based on the 2021 Gaming Compact into escrow.”

Bitner told PlayUSA in February that payments had resumed even though the compact had been voided by Friedrich.

Litigation against the State of Florida and the Department of the Interior was brought by the owners of the Magic City Casino and Bonita Springs Poker Room pari-mutuel outlets.

It’s all awaiting movement in the US District Court of Appeals, a process observers believe could take years.

Subsequent appeals could eventually send the case to the US Supreme Court, which allowed states to legalize sports betting by overturning the Professional and Amateur Sports Protection Act in 2018. Since then, 32 American jurisdictions have legalized the enterprise.