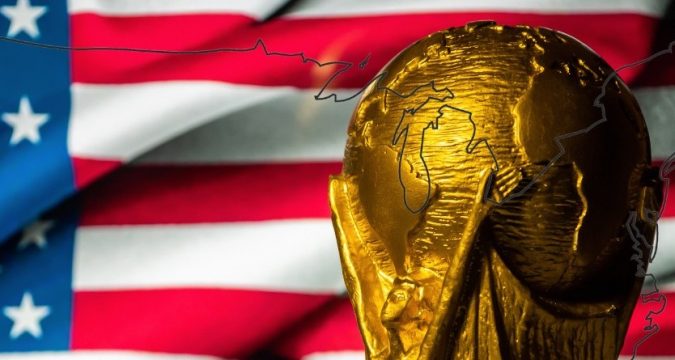 Eleven American cities will host the majority of games to be played as part of World Cup 2026.

The stadiums there will be magnets for foreign supporters and the increasingly fervent fanbase that continues to develop in the United States.

And the states where those games will be played will soak up billions in tourism dollars gleaned from hotels, food, and ridiculous patriotic hats.

But, because of varying state sports betting legalities, only three (as of now) will make anything from the thousands of bets made within their borders.

Take a look at the US host cities in the infographic below.

World Cup 2026 will bring fans, tourists, sports bettors pouring into the US

Which US cities hosting the 2026 World Cup have legal betting?

According to a 2018 study by FIFA, global soccer’s governing body, $143 billion was wagered legally on the 2018 World Cup.

Furthermore, to the study in conjunction with Sportradar, an average of $2.2 billion was wagered on every match, with an estimated $7.6 billion on the France-Croatia final.

Some context: $129 billion has been wagered legally in the United States since the Professional, and Amateur Sports Protection Act was nullified by the Supreme Court in 2018, according to revenue data compiled by PlayUSA.

“The World Cup is one of the premier sporting events that brings in billions of dollars of wagers, both legal and illegal,” Brendan Bussmann, B2 Global managing partner, told PlayUSA.

The 2026 World Cup will expand from 32 to 48 teams.
The number of games will explode from 64 to 80.
US sites will host 60 of those games.
Landing the final, according to the FIFA report, would be very lucrative for a state with legal, mobile sports betting because more than 80% of lawful wagers in the United States are transacted that way.

But as of right now, only host states New York, New Jersey, Pennsylvania, and Washington are in a position to harvest revenue from foreign and domestic tourists desirous of making a legal sports bet while attending a game.

And even then, only fans attending games at MetLife Stadium in East Rutherford, NJ and Lincoln Financial Field in Philadelphia would have a mobile/online option.

As far as denizens of the games being contested at Lumen Field in Seattle, unless Washington expands sports betting beyond tribal casinos it’s an expensive and cumbersome trek out to a sportsbook they’re unlikely to make.

For World Cup tourists, the choice will come down to patronizing legal platforms if they’re available or, potentially, illegal offshore sites.

“While 2026 may seem like a long time away, there are over a handful of states that could legalize before that time and score significant revenue based off of this single event,” Bussmann said.

Taxable revenue from sports betting has been a powerful motivator for state legislators. Considering the wave coming in 2026, politicians in a key group of states could soon become soccer ultras.

Are these the ultimate states for American sports betting?

Take a look at these states and their large stadiums:

California, with 39 million residents and the fourth-largest economy in the world, remains the golden prize under the Golden Gate. World Cup betting or not.

But the volume of ballot measures and media blitzing signals a potential breakthrough.

Sports betting in Florida was legal last November, but a federal court judge voided the Seminole Tribe of Florida‘s compact with the state, shutting down the operation and setting up possibly years of litigation.

Massachusetts will host games at Gillette Stadium in Foxboro as part of a Boston bid, and Missouri (Kansas City) seem close.

Massachusetts legislators continue to hack at a sports betting bill with an amenable governor that has seemingly had a pen since PASPA was repealed.

A bill got close in Missouri this year and legalization in neighboring Kansas figures to spur momentum in the future.

“California offers the quickest potential path for sports betting at SoFi and Levi Stadium as it is on the ballot this fall.  It is not a done deal that the voters will approve one or both of the initiatives.  It may take another round in 2024,” Bussmann said.

“Massachusetts and Missouri seem plausible in the near future so these states will likely benefit from hosting World Cup events.  The wild cards become Texas, Florida, and Georgia for sports betting over the next four years.  There are plenty of reasons that it makes sense but the policy conversation in each of those states are complex.”

But the payoff figures to be of global proportions.