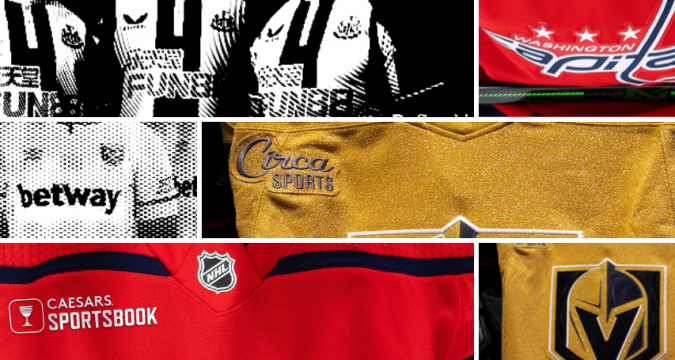 North American pro sports teams and their counterparts in the United Kingdom have been skewing in opposite directions for months in terms of their relationships with gambling purveyors.

While all “big four” domestic leagues continue to cozy to sports betting operators and the exposure and revenue stream they purport to bring, European legislators have grown increasingly willing to reduce the pervasive amount of advertising the industry generates.

Mainly because of its possible influence on minors, particularly when advertising on uniforms.

Italy and Spain have already enacted such a ban, which will eventually sting the English Premier League, where nine of 20 clubs had gambling logos on their jerseys in the season that concluded on Sunday.

There’s an opposite momentum over here in the US.

Currently, only National Hockey League franchises, the Washington Capitals (Caesars) and Vegas Golden Knights (Circa), have announced deals to stick gambling-related patches on game jerseys beginning in the 2022-23 season. But more figures to follow.

That year could be a pivotal one in England, as BBC Sports reported the government was discussing with the EPL a way to voluntarily shed their gambling sponsorships before the ’23-’24 season.

One of those teams, Newcastle United, figures to drop its Fun888 deal for something aligned with the business interests of its Saudi owners.

However, this past season every EPL club except one had some sort of gambling sponsor deal. The “front-of-shirt” deals comprise $79.22 million in value, according to Sportico.

NHL teams are allowed a 3-by-3.5-inch uniform patch for advertising beginning the next season. Washington was the first to acquire a gambling partner to subsidize the addition. MLB’s foray into uniform advertising has so far been limited to FTX cryptocurrency on umpire uniforms.

Ads on player jerseys are expected as early as October, but gambling deals won’t be permitted even though players can now endorse sportsbooks. The Rockies’ Charlie Blackmon is so far the only player to do so.

The NBA has allowed teams to sell uniform patches since 2017, but gambling companies are not allowed there either. Of course, that rule was implemented before the repeal of the Professional and Amateur Sports Protection Act began the great reformation and monetization of gambling in the mainstream.

The next Collective Bargaining Agreement negotiation figures include many gambling-related discussions, from players attaining the right to endorse sportsbooks to teams following the lead of the Capitals and Golden Knights. The NFL currently doesn’t allow teams to sell ad space on game jerseys. Practice uniforms, yes.

While the UK moves represent a ramping up of the phasing out, it shouldn’t have blindsided EPL clubs. The House of Lords Select Committee made the recommendation initially in 2020 after revisiting the 2005 Gambling Act.

The upcoming phase would supposedly spare lower-division clubs that have a more difficult time landing entitlements, according to BBC Sport.

A recent YouGov study in Great Britain asserted that 1.4 million there are being harmed by gambling, with 1.5 million at risk.

Said a Department for Digital, Culture, Media, and Sport to BBC Sport:

“We are undertaking the most comprehensive review of gambling laws in 15 years to make sure they are fit for the digital age. We will publish a white paper which sets out our vision for the sector in the coming weeks.”