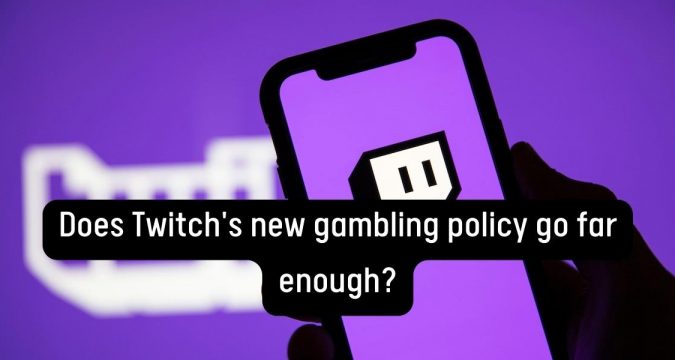 Streaming entertainment service Twitch is set to limit the types of US online gambling content its partners can feature. Some details of the forthcoming policy change suggest that it might not be enough to address the concerns of partners and viewers, though.

While the full language of the policy updates is not yet available, the announcement’s language reads like it could have too many exemptions and be too vague to actually be effective. At the same time, user concerns might not be the first priority for Twitch.

On Sept. 20, Twitch announced oncoming changes to its gambling policy.

While not isolated to a single Twitch partner or incident, one particular streamer and a connected revelation could have been the catalyst for this announcement. According to Alex Tsiaoussidis of DOT Esports, streamer ItsSliker made a startling confession on Sept. 17.

ItsSliker admitted he has an issue with pathological gambling and further stated he scammed people to the tune of $300,000 as part of that issue. While that might have been the stream that broke the camera’s back, it’s representative of greater criticisms of gambling content on Twitter.

Why gambling streams on Twitch have been an issue

Even for streams that aren’t part of fraudulent activity, there has been some controversy. The common criticisms include the content serving as a trigger for those like ItsSliker who have an issue with compulsive gambling and the content working to expose young people to gambling.

According to Stream Scheme, the largest plurality of Twitch users are between 16 and 24 years of age. That breakdown also claims almost a quarter of users are in the United States. Thus, underage people consuming gambling content is a legitimate concern.

As far as the content being an issue for those who are of age to gamble but struggle with problem gambling, Twitch has mostly left the handling of that situation to its partners. That’s led to irresponsible content like streamers only showing their wins and running giveaways attached to online casino promotional codes.

This policy update by Twitch might not be sufficient to address those concerns. The information the platform has already shared contains several weaknesses as far as a robust consumer protection strategy goes.

To sum up what Twitch has stated, Twitch will no longer allow gambling streams… except for those gambling streams it does allow. Many questions about the policy could be answered by the upcoming full release of the policy changes before the Oct. 18 effective date. For the time being, there are several relevant questions, like:

Which jurisdictions does Twitch deem as providing sufficient consumer protections?
Does Twitch understand that a streamer or viewer can still develop a gambling problem only using licensed sites?
What about underage users accessing content?
Will compliance reviews of featured sites depend on users making complaints?
Will the rules around poker and sports betting streams be completely unaltered?

If the only change Twitch is making is banning streamers from broadcasting a handful of sites in an attempt to dismiss the commotion around ItsSliker’s confession, that’s a weak and almost futile modification. It does nothing to actually address the factors that are part of ItsSliker’s situation.

Twitch has no legal obligation to screen users for age when they access gambling content or require that streamers represent their gambling activity truthfully. There’s a difference between legal and moral obligations, however.

Twitch should address irresponsible gambling content on its platform

In the same way that Twitch can dictate to its partners which online casinos they can broadcast, it seems the platform should have the authority to require streamers to include information about resources for those struggling with problem gambling.

In the same way that Twitch can review content for bigoted language and impose suspensions, Twitch should be able to review content that paints a misleadingly rosy picture of online gambling. Without actual consequences for that behavior, there’s no incentive for any of its partners to alter their approaches.

These rules should apply to poker and sports betting streams as well. In case Twitch was not aware, those are still forms of gambling even if there is some skill involved.

Twitch doesn’t have the staff to actively police all of its content live for compliance with all policies and thus mostly relies on users to report infractions. The problem with that reactive approach, however, is that this kind of damage is difficult to undo.

A temporary suspension for broadcasting unlicensed slots isn’t going to cure ItsSliker’s gambling addiction. While ItsSliker and others who have pathological gambling issues must address their struggles, Twitch can reduce the ways in which it contributes to that problem. This is a golden opportunity to do just that.