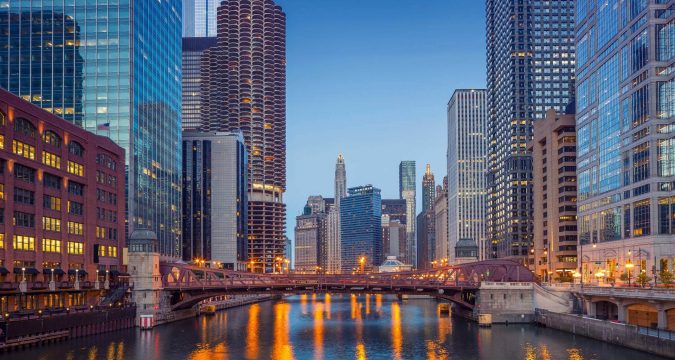 The second round of meetings between casino operators hoping to win possession of Chicago’s sole casino license and the public continues.

This time, Bally’s Corporation made its case for a proposed casino at the Chicago Tribune Publishing site.

A Chicago Bally’s casino has merit

Bally’s casino plan begins and ends with its ability to turn a primarily concrete location into green space.

The company plans include:

As for gaming, the casino will have 3,400 slot machines and 173 table games. In total, the project will cost roughly $1.74 billion.

As with the other two proposals, there is no mention of Illinois online casino gaming.

During the almost two-hour meeting, the company made it apparent that nothing was set in stone. Bally’s chairman Soo Kim said changes to the plan would happen depending on community input.

“The site is flexible. We can do whatever the community wants,” Kim said.

Additionally, Bally’s promised to partner with local restaurants and the famed Second City comedy outfit to create an entertainment venue. If selected, the company said it could have a temporary casino in place by the summer of 2023. The permanent location would not open until the first quarter of 2026.

Significant opposition comes from the River North Neighbors’s Association (RNNA). The organization claims a casino will have a “negative impact” on the surrounding area.

In a letter read during the meeting, the RNNA said traffic, public safety, and quality of life for the thousands of residents could be affected.

Another resident, Jonathan Solomon, who represented his condo association, said he doubted the traffic studies presented by Bally’s.

Bally’s estimates its casino could help decrease traffic by 60% during morning rush hours.

“It seemed that there were traffic issues (tonight), so to have a venue that can seat 3,000 and a casino that can have hundreds of people sitting there and gambling, there’s going to be traffic issues,” Solomon said.

The $191 million is contingent on Bally’s being allowed to build a 500-room hotel. If the company is permitted to construct a 100-room hotel, revenue for the city will drop to $176.9 million.

On Tuesday, Hard Rock One Central estimated that its casino could generate $185 million in tax revenue after six years.

Chicago isn’t the only location Bally’s eyeing. On March 31, the company said it wanted to bring an integrated resort to the Japanese city of Fukuoka.

Japanese gaming efforts revolve around casinos licenses in Nagasaki, Osaka, and Wakayama. However, Bally’s hopes that after the Japanese government reviews the three casino bids, it will be open to further discussion.

The company did say it would spend upwards of $3.9 billion on a gaming venue if allowed.

The last proposal to run the public gauntlet will be Rivers 78.

Neil Bluhm and Related Midwest will represent the casino plan on Thursday. The meeting will run from 6-8 p.m. at the Isadore and Sadie Dorin Forum.