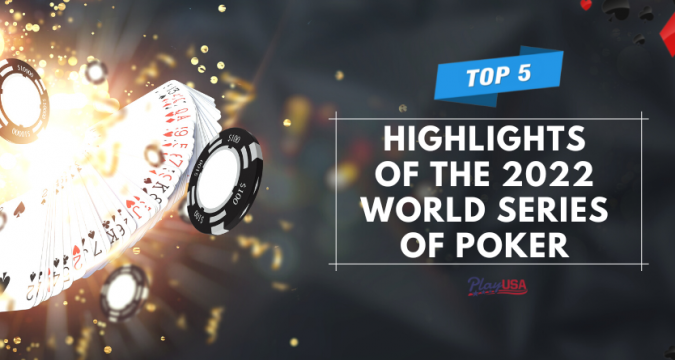 After about six weeks, more than 70 events, and millions of dollars changing hands, the 2022 World Series of Poker is in the home stretch.

The $10,000 no-limit hold’em main event is nearing a final table, and postlim events are in full swing. In fact, there are only a handful of bracelets still up for grabs over the next several days.

With open events set to wrap up this Sunday, there’s no better time to reflect on this year’s highlights. Between notable bracelet victories, a brand-new venue on the Las Vegas Strip, and a bit of poker history, the 2022 WSOP was one for the ages.

Here are our top five highlights from the 2022 WSOP:

#5 Moving to the Strip was a smashing success for WSOP

If you were to close your eyes and envision Las Vegas, what do you see? For most people, it would be the bright lights and massive casinos on the 4.2-mile stretch on Las Vegas Boulevard known as the Las Vegas Strip.

It’s iconic. Forget the rest of the state. The Las Vegas Strip generates enough gambling revenue to be one of the country’s largest gaming markets.

But despite the WSOP calling Las Vegas home since Benny Binion created it in 1970, the massive poker festival never called the strip home. At least not until 2022.

For most of its life span, it was held in Downtown Las Vegas at Binion’s Horseshoe Casino. From 1970-2004, the world’s best poker players would head to Binion’s to test their wits and battle at the highest stakes.

Over the course of its 34-year stay at Binion’s, the tournament series steadily grew in popularity. Eventually, the festival simply outgrew its home. It needed to find a bigger space to accommodate the growing field sizes.

Harrah’s Entertainment stepped in to fill that void. In 2004, the company, now known as Caesars Entertainment, purchased the rights to the WSOP brand from Binion’s Horseshoe.

As a result, the WSOP found a new home for the 2005 iteration. Harrah’s used the massive convention center at Rio All-Suite Hotel & Casino to hold the tournament series. It was during those first few years at the Rio that the WSOP saw some of its largest turnout in history.

After 17 years just off the strip at the Rio, Caesars decided it was time to put the WSOP in the heart of the Las Vegas gambling scene.

Caesars moves the WSOP to Bally’s and Paris for 2022

Last year, WSOP officials announced that the 2022 WSOP would be held on the Las Vegas Strip for the first time. Bally’s and Paris would host the world’s largest poker series this year.

Moving the series to the Strip provided several positives for participants. For example, poker players would be within walking distance of other venues that hosted other tournaments or cash games. Furthermore, there were a plethora of dining options that weren’t available at the Rio.

However, there were several reservations. Mostly about space.

Would there be enough parking? Is the convention center at Bally’s and Paris big enough to hold the massive fields? For locals, would the traffic of the Las Vegas Strip make commuting to and from events a nightmare?

From an operations perspective, this was a huge success. Sure, there were some drawbacks. There were plenty of complaints about the lines for alternates waiting for seats in some of the large field no-limit hold’em events.

But overall, this went about as smoothly as officials could’ve hoped for.

Phil Hellmuth and Phil Ivey are two of the most well-established poker players on the planet. The pair of Poker Hall of Famers have been playing high-stakes poker tournaments since before it was cool. As a result, the two sit atop the career WSOP bracelet count.

Hellmuth is the all-time leader with a whopping 16 WSOP titles. While Ivey is the owner of 10 and is tied for second with Johnny Chan and Doyle Brunson.

Both flirted with adding another to their already impressive resumes but fell just shy of hitting another milestone. Hellmuth finished runner-up in the $3,000 no-limit hold’em freezeout to David Jackson, and Ivey earned second place in the $100,000 high roller no-limit hold’em.

I wanted to separate these two highlights, but then I’d have a top-six list. And I just don’t think that’s a real thing. So, for the sake of brevity, I combined the two.

Despite Ivey and Hellmuth not being on the list, several established professionals added bracelets to their trophy cases this year.

High rollers Dan Smith and Alex Foxen got the proverbial monkey off their back this year. They each won an event and were able to get their names out of the dubious “best player without a bracelet” discussion.

Eli Elezra and Adam Friedman each won their fifth this summer. For Friedman, his win in the $10,000 seven-card stud championship marked the fourth consecutive WSOP (not counting the online 2020 version) where the Ohio native won an event.

Brian Hastings one-upped both Elezra and Friedman by winning the $10,000 2-7 tripled raw for his sixth WSOP title.

There was one player I failed to mention in the section above. Dan Cates.

The Maryland native, who is affectionately called “jungleman” because of his old online poker screen name, made poker history. He became the first person ever to win the $50,000 Poker Players Championship in back-to-back years.

Last year, Cates dressed as Goku, a character from the Japanese animated series Dragon Ball Z for the final table. He eventually bested the 63-player field to win $954,020.

He topped a field of 112 players to win $1.45 million and his second career bracelet. To make it slightly more impressive, he didn’t break character once. He stuck to his professional wrestling bit for the entire tournament.

#2 Layne Flack inducted into the Poker Hall of Fame

Last weekend, the late Layne Flack became the 61st member of the Poker Hall of Fame. Flack passed away last July at the age of 52.

Flack was selected by the 32 living members of the Hall of Fame, who were each given a vote.

The following month, he won back-to-back no-limit hold’em tournaments at the Legends of Poker series in Los Angeles to earn his nickname ‘Back-to-Back Flack.’

For the first time since the pandemic, there were no restrictions on the WSOP.

In 2020, the series was played online. Last year, there were travel restrictions, a statewide mask mandate, and a vaccine mandate to set foot in the Rio convention center. This year, all you needed was enough cash to buy-in.

In response, thousands of poker players flocked to Bally’s and put up $10,000 to play the main event. A total of 8,663 players put up the money. It’s the second-largest field in history, just 110 entries shy of the record set in 2006.

In 2006, Jamie Gold won $12 million for his victory. This year, the eventual champion will pocket $10 million. Day 6 of the tournament is set to kick off the afternoon of July 12. There are 123 players remaining, with James Hobbs leading the pack.

Everybody is guaranteed cash of at least $62,500. The event will reach a final table on Wednesday night. The final nine players will get a day off on Thursday before playing the final table over the course of Friday and Saturday.