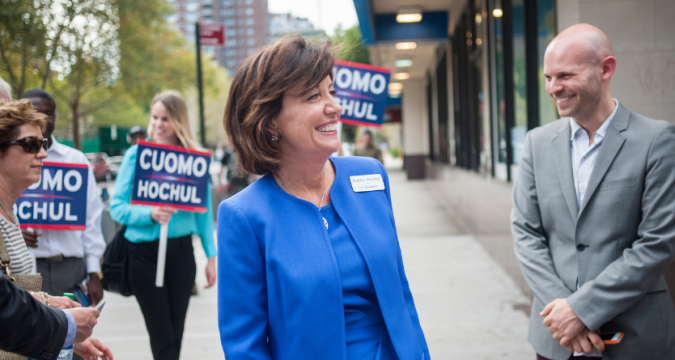 The state of New York’s plan to provide hundreds of millions of taxpayer dollars to fund the construction of a new stadium in Buffalo has many critics. Perhaps none of them have been as vocal as the Seneca Nation.

In addition to releasing comments on the state’s plan, the Senecas have also launched an ad campaign criticizing the move. It’s the continuation of what’s becoming an increasingly negative relationship with the state.

Shortly after it became apparent that the state’s budget for the fiscal year starting in 2022 would include public money for a new stadium in Buffalo, the Seneca Nation spoke out.

The budget allocates $600 million for the project from New York plus another $250 million from Erie County. Additionally, the state will spend another $100 million over the first 15 years of the stadium’s life for maintenance. Furthermore, the law requires the state to spend another $180 over the 30-year life of the lease for capital improvements.

As Pagels alluded to, a portion of that money came from the Seneca Nation. It’s that element that has motivated the tribe to do more than just release a statement.

Senecas double down with ad campaign

Last week, the Seneca Nation purchased radio and television ad time in Buffalo. The ads broadcast a message similar to that which Pagels shared.

“The state of New York just received hundreds of millions of dollars from the Seneca Nation,” the ad begins with.

“The additional funding gave Gov. Hochul a great opportunity to help repair our roads, build hospitals, fix our bridges and support our schools. What did she do instead? She gave away hundreds of millions of dollars to build a football stadium for the NFL.”

The ad continues to accuse Gov. Kathy Hochul of benefitting from the transaction. Her husband, William, is an executive with Delaware North.

Delaware North has had a contract to provide services for Bills games since 1992. That includes concessions and merchandise sales. In addition, Delaware North services the stadium’s premium seating areas.

That contract is due to expire after the upcoming NFL season, however. Hochul has said that neither Delaware North nor her husband had any part in creating the stadium subsidies, and there are no assurances Delaware North will win a bidding process for the renewal of its contract.

Regardless, an ethics complaint has been filed for an alleged failure to abide by the terms of an ethics recusal memo Hochul signed last August. In that document, she promised not to use her position as governor to benefit Delaware North.

The ethics complaint also points out how the spouse of Hochul’s top aide, Karen Presichilli Keogh, works as a lobbyist for a firm that has represented Delaware North. It’s unclear right now what consequences Hochul could face if those investigating her determine she violated her oath.

What is obvious, though, is this doesn’t improve the relationship between New York and the Seneca Nation. That strain began long before Hochul took office.

Much of the bad blood turned bad as the result of a dispute over the language of the gaming compact between New York and the Senecas. While that dispute ended in “defeat” for the Seneca Nation in January, it stretches back years.

The state and the Senecas formulated their last compact in 2002. At the time, some ambiguous language in the compact specified payments to the state from the Seneca Nation for the first 15 years of the deal. The Senecas operate three tribal casinos in upstate New York.

The Seneca Nation stopped making those payments in 2017, arguing the compact only obligated them to do so for the first 15 years of the deal. The state took issue with that reading and filed suit against the Seneca Nation.

Ultimately, federal courts sided with the state. In January, the tribe agreed to “bring its account current” rather than appeal the loss. The Senecas did make the payments after the state froze the Senecas’ bank accounts.

As negotiations on a new compact are in progress, the atmosphere around those dealings seems fraught. If this ad campaign by the Senecas is a foreshadowing of how that process will play out, it could be an arduous road with grievances aired in public.