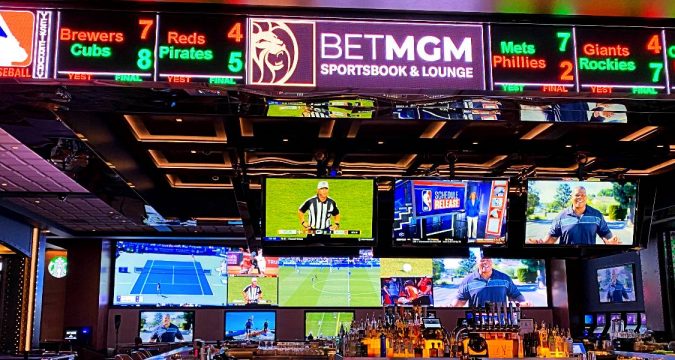 BetMGM is now operating the sportsbook at Cosmopolitan. This is the first step to integrating Cosmopolitan into the MGM Resorts system after it purchased operations of the Cosmopolitan for $1.625 billion last year.

The changeover to BetMGM operating the sportsbook marks the first time visitors will see any kind of MGM Resorts branding inside the Cosmopolitan. Additionally, it turns out that this is a little more than just renaming the sportsbook.

The purchase deal closed earlier this year but so far not much has changed to the luxury resort and casino located in between other MGM properties, Bellagio and Aria.

One juicy piece of info players need to know? Anton Nikodemus, president and chief operating officer of the Cosmopolitan, Aria and Vdara tells PlayUSA that for now, the BetMGM sportsbook will be the only part of the Cosmopolitan where guests can earn MGM Rewards points.

The entire rest of the property still uses Cosmopolitan’s Identity Rewards program. Nikodemus says this will continue until some time next year when the entire property begins to use MGM Rewards.

MGM Rewards launched earlier this year with a new loyalty program. Sports bettors can present their MGM Rewards card when placing wagers to earn points and status for all MGM Resorts properties in Las Vegas and around the country.

How The Cosmopolitan sportsbook will largely remain the same – for now

Besides the BetMGM name, visitors to the Cosmopolitan won’t notice many differences in the sportsbook. Guests will actually see many of the same faces at the sports betting desk as well as the video poker bar.

There are no structural changes planned. Nikodemus said the company will evaluate operations after football season to see if there’s anything that needs to be changed.

Bettors will receive drink tickets when placing wagers. The rate will be similar to other BetMGM sportsbooks in Las Vegas.

The video poker bar in the sportsbook will continue to use the Cosmopolitan drink ticketing system. Don’t expect to see changes at the bar until the Cosmopolitan becomes an MGM Rewards property.

Cocktail waitress service in the sportsbook will also continue. Food delivery will still be available on busy days.

MGM Resorts fans might notice one BetMGM service that is offered at other properties that will not be coming to the Cosmopoltian until next year.

Sports betting kiosks at the Cosmopolitan will only be available inside of the sportsbook until the property is integrated into the MGM Rewards system. Other MGM Resorts properties have kiosks located throughout the casino floors.

No changes to the BetMGM Nevada app

BetMGM is a national sportsbook operator. The sportsbook app is legal in 16 states and Washington DC.

But BetMGM in Nevada is on an island of sorts. The BetMGM Nevada app is not compatible with any of the other markets.

While BetMGM is expanding into a new property, there are no plans to change the app in Nevada.

Not only is the actual app different but the odds and betting menu are separate from the app in other states. The odds in Nevada don’t move along with the rest of the country. Odds on BetMGM Nevada change with wagers placed in the Silver State.

Most importantly, a BetMGM Nevada app account isn’t connected with the other states. Anyone visiting Las Vegas will have to register for a different BetMGM account to wager on a mobile device in Nevada.

Signing up for a sportsbook account in Nevada must take place inside of a retail sportsbook. In addition to the Cosmopolitan, there are BetMGM sportsbooks at the following Nevada casinos:

BetMGM Nevada will eventually become part of the national platform but there is no target date at this time.

Carrot Top bets on Raiders to win the Super Bowl

Most sportsbook celebrations around the country usually feature a former local sports star. Not Las Vegas!

In a fitting cross-property promotion Carrot Top was on hand to celebrate the rebranding of the BetMGM sportsbook inside the Cosmopolitan. The headliner at Luxor made a trip north on the Vegas Strip to get in on the action. That’s pure Vegas!

Carrot Top placed a $50 wager at a BetMGM kiosk on the Las Vegas Raiders to with the Super Bowl this year.