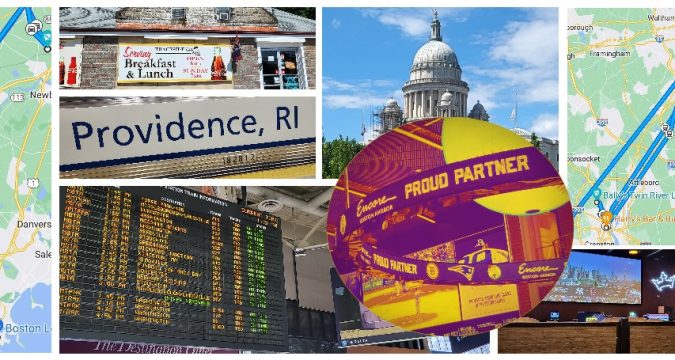 EVERETT, Mass. – A perturbed-looking man pushed his hot dog wrapper across the table and leaned back in his booth to stare up at the absolute shellacking the Yankees were putting on the Red Sox a few miles away across the Mystic and Charles rivers.

A tattooed 20-something who seemed completely comfortable with his choice of a black Aaron Hernandez Florida Gators jersey chased the remnants of a Harpoon with the first swig of the next.

He turned from the massive rotunda of TVs to his friend, who was clearly agitated at Boston’s pitcher.

Fans. It’s not like they had bets on the local team this Friday night, though. At least not legal ones.

Amid all the sadness and beer and pub food, the most pathetic thing of all this night at the Encore Boston Harbor was the would-be sports betting windows walled off behind polished glass. This little eddy pool of sports contrasted sharply with the baroque energy of the gleaming casino floor behind it, ruby red Venetian chandeliers and all.

It was just a sports bar and will remain so until, after numerous tries, the Massachusetts Legislature eventually legalizes retail and mobile wagering. If not by July 31, not this year. Another sad year in the Encore sportsbook would ensue.

It all seems so weird in this sports-mad town of Boston, the birthplace and home of DraftKings, where gambling signage pops from the Green Monster at Fenway Park. Where the Encore is spoken about in almost reverent tones for its opulence. It’s easy to envision the same Bostonians who line 10-deep for Dunkin’ coffee, wildly patronizing the home sportsbook as they do the home teams and brands.

Sports-mad Massachusetts has wagering options, just none that are local or legal

Sports bettors in Massachusetts are already betting, of course, if they choose. As in every other state – legal sports betting or not – a host of unregulated, offshore sites penetrate state lines to monetize whatever feeling they have about the Red Sox game that night.

But if the upright citizens of the commonwealth want to do things legally, there are options quasi-nearby. Mobile sports betting is legal and underway in each bordering state except for Vermont, so driving across state lines to place a quick bet is easily accessible.

For Bostonians, who comprise 72% of the state’s population, there’s Rhode Island to the south and New Hampshire north on Interstate 95. Everyone understands this—especially those who are trying to rectify the situation.

“[DraftKings] found that during the 2022 Super Bowl, nearly 30% of all the bets in New Hampshire were from Massachusetts. Where I live, it’s about a 25-30-minute drive.
“People hop in their car. They go over the state line, sit in the parking lot using their DraftKings app. People in the southern part of the state go to Rhode Island. Connecticut as well.”

Plaudits for the do-right crowd. But what of the roughly 34% of Boston residents that don’t own cars in a city with one of the lowest vehicle ownership rates in the United States?
On a junket to the National Council of Legislators from the Gaming States last week, I decided to find out.

BOSTON – Amtrak train 137 eased out of South Station at a punctual 1:50 p.m. for a scheduled brief jaunt southward to Providence, R.I. The oversized gray recliner was a welcome respite after a 4 a.m. wakeup for a flight from Tampa and a two-mile walk through the Back Bay after checking into my hotel.

A gentleman one seat ahead, also on the window, uh-huh’d for the first ten minutes of the route until finally rambling in Hindi to the caller on the other end of his headphones. He had a lot to say after waiting his turn.

A few minutes later, a couple of bros in Northeastern t-shirts filled the seats behind me – well-polished and reflective, those particular windows – and began jabbering some nonsense about the pop culture relevance of Jar Jar Binks. They proceeded to lay out their unfulfilled social lives. Stunner.

The ride was brief. A fairly striking view of the Rhode Island capitol dome greeted visitors once on the platform and once outside the spartan station … little else.

In practice, I could have waited for the northbound and headed directly back to South Station. Rhode Island launched mobile sports betting in 2018 through the state lottery. So I could have tested the user experience, lived the life of a theoretical Massachusetts sports bettor, and crucially crossed another state off my legal wager scavenger hunt list somewhere near the state line north of Pawtucket.

But not wanting to open another account I’d never use again, I’d decided to Uber outside of town to Bally’s Twins Rivers Casino, a refurbished dog track with a retail sportsbook.

This was not the Encore by any comparison. Older, darker, and smoky, it relegated its sportsbook to the far reaches of the facility, where a series of kiosks were housed in the old greyhound grandstands like stacks of ballroom chairs.

That the grandstand gallery looked out over a greyhound track repurposed as an unpaved parking lot – with a few sections of railing left on the ends – didn’t enhance the ambiance.

My bank card of choice was denied several attempted cash withdrawals – and didn’t text me of this until after I had left – but a friendly teller helped with an advance on a credit card.

One ultimately unsuccessful betting slip spit out of a kiosk a few minutes later – damned Red Sox – followed by another sure to remind me that I’m stupid in the fall.

With no other compelling reason to hang around – and feeling lucky I hadn’t been approached by security for carrying a backpack – I Ubered back to Providence with time to prowl around the extremely quiet downtown.

Amtrak 174 was punctual and disembarked at the Back Bay Station, a welcome thought by that time of the day.

EXETER, N.H – I knew I’d made this one harder than it needed to be from the start.

I knew opening the DraftKings app right there and funding it my phone would work as soon as my Amtrak regional crossed the state line near a few miles north of Haverhill, Mass. (home of Rob Zombie). And it did.

After two geo-location refreshes, I

banked a couple of unsuccessful microbets on the early MLB slate and took a flyer on Nick Kyrgios in the Wimbledon men’s final.

But I wanted to go see The Brook, the employee-owned, self-described largest charity casino in the nation and former greyhound track that just so happened to have a DraftKings sportsbook.

So even with a 7:50 p.m. Delta flight out of Logan looming and the foreknowledge that I probably should have taken the MBTA into the comparatively bustling Newburyport, Mass., because there were scant few ride shares in Exeter … I had gone. And so I went.

It had all started out so confidently. As we pulled out of North Station at 8:50 a.m. on train 691, four stately ladies from Mississippi chirped over their dinner plans for that night in Brunswick, Maine, and AirDropped pictures to each other from seemingly every place of note in Boston. They’d warned everyone they’d be loud.

I felt decidedly less confident and much more self-reflective as I stepped off the train and onto the outdoor platform in Exeter an hour later. Alone. Not intimidated. But I grew up in a town about this size, and I’d not expect a ride there, either.

Immediately, my Lyft app pushed a notification canceling the ride I had scheduled the previous night.

Exeter is one of those tiny towns where one store serves as the heartbeat of the community, and here that seemed to be the Trackside Cafe and general store, located happily adjacent to the train platform.

A 12-deep line curled through the back of the store for counter eating spots as a man wearing a ‘Florida’ hat cashed in a winning lottery ticket.

The woman manning the lottery machine and the register – and exchanging information on where the trout were biting locally – was semi-encouraging about the prospects of landing a ride.

Sure enough, “David,” the Uber driver – the only Uber driver within 30 miles – thankfully arrived at my pacing spot in front of the cafe for the trek out into the woods.

This had been a tougher – and more stressful – trek than the Thursday trip to Providence, not just because the train ride was twice as long.

Granted, I would have had no concerns about being 51 miles from Logan Airport, six hours from my flight, if I had a car. And if I’d just wanted to place a bet and turn straight back, I could have just hung out at Trackside Cafe until the 3:04 southbound.

But where’s the adventure in that? So this overstuffed leather couch at The Brook’s sportsbook felt good. Three large screens – one dedicated solely to pari-mutuels as greyhound racing remains popular among the regulars – adorned the front wall, and a series of smaller TVs lined my cubicle, which took on a man cave feel with the dining room table before me.

As opposed to Twin River, The Brook had maximized part of the defunct greyhound grandstand and converted the sloped room into a typical terraced sportsbook. There were ticket writers, but there was also my phone with an app, so I stayed on the couch for betting.

The comfort lasted only so long.

A quick thumb swipe to my ride-share apps revealed, as feared, no drivers. David must have knocked off for the day.

Luckily, a cab company in nearby Newburyport dispatched a well-worn minivan.

The 696 was late but within the tolerances of my timetable.

North Station by 4:30 p.m. with a surprising amount of fans heading to Fenway for the series finale. A walk through Boston Common to the hotel and my luggage for a 5 p.m. departure for Logan.

It had been an experiment worth doing and a trip to remember, but nothing a Bruins, Celtics, Patriots, or Red Sox bettor would undertake just for the sake of doing the right thing every time.

Ultimately, I’d left behind some money in New Hampshire and Rhode Island, just like the Massachusetts bettors Parisella says nag him about reconciling two bills into law before the session ends on July 31.

“I don’t think I hear more about any other topic from my constituents,” Parisella related at NCLGS, “Jerry, when the hell are we going to get sports betting? I mean, we’re doing it already, right?’”

Not legally. Not at home. And not down at the Encore.

Boston Sports Bettors Have To Travel To Make Legal Wagers. Here Is One Man’s Advernture