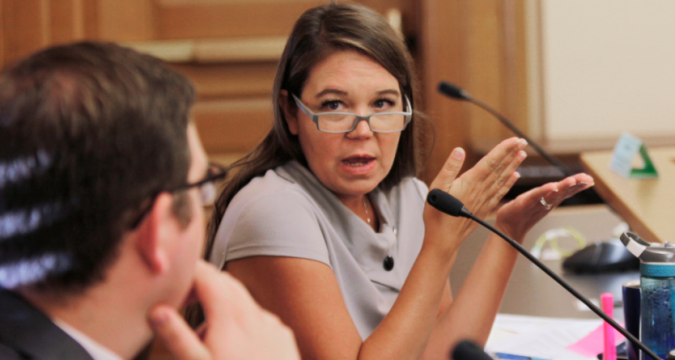 Kansas and Missouri used to fight on the football field (sometimes literally).

They fought on the basketball court.

And now, the Border Showdown between the two states has become a battle between state legislatures to legalize sports betting bills.

“I do not like Missouri. I want to beat them,” said Kansas Rep. Stephanie Clayton (D) during a hearing earlier this week.

Right now, the game is too close to call. Missouri made a big move toward legalizing sports betting. On Wednesday, Kansas lawmakers did the same, amending a House Bill with language from an earlier-approved Senate bill and passing it 88-36.

What’s next is a joint Senate-House conference to fine-tune the language and move it forward.

“This has been a good debate that’s been going on for years,” said Rep. John Barker (R) in the “Kansas Reflector.”

“It’s nice to pass bi-partisan bills and I think we have arrived at that today.”

The initial debate on SB 84 was over who would control the industry in the state. The final language in the 42-page bill gives the power to the Kansas Lottery, which can offer sports wagering through lottery gaming facility managers.

Buried on page 30 is the issue the Kansas legislature has to settle, just how much revenue Kansas will retain.

At the moment, the bill says:

A previous bill in the Senate had proposed a tax rate of 14% on in-person gambling and 20% online. Another version of the House bill appeared to stall in committee but was pushed forward on Wednesday. One estimate by the Kansas Lottery pegs revenue for the state coffers at $1.8 million in 2023 and $6.0 million in 2024.

Casinos can also reach agreements with professional sports teams and offer to bet at home stadiums.

One of the bill’s detractors mocked the idea of placing measures on responsible gaming into law by saying the bill itself was creating the issue, so it was silly for the bill to then try to solve it.

The current bill places 2% of all sports wagering revenues into the problem gambling and addiction fund. It also creates a self-exclusion program for people fearing that their gambling has gotten out of control to voluntarily enter and prohibit them from any future winnings for a preset amount of time.

No person under the age of 21 shall be permitted to place a wager.

For Kansas Gov. Laura Kelly to get the bill, the Senate must pass an identical version before the legislature closes session on May 20.

Missouri may have the edge here. Its sports betting bill also just needs Senate approval, and its current session ends May 13.