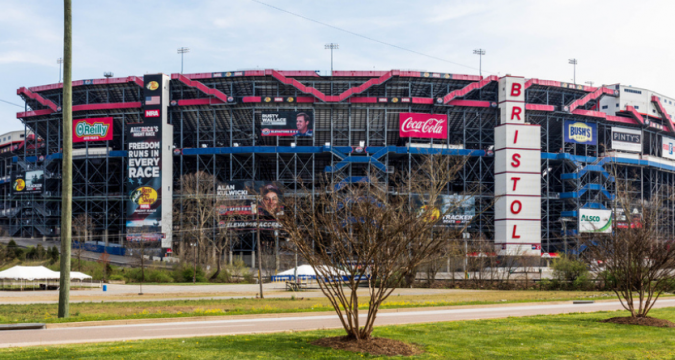 The exact location of Bristol Casino – Future Home of Hard Rock – yes, that’s the official name – is temporary but will add to the offerings in this region of the US casino and US online casino industry.

Bristol, known for its legendary NASCAR track and a state line going right down Main Street, will eventually be home to a $400 million development project under the Hard Rock banner, but for now, the spot of the former Bristol Mall becomes Virginia’s premier gaming location and an interesting historical footnote.

“We are excited to open the casino and welcome guests.”

Virginia takes the Hard Rock road for its casino

Virginia took an unusual path to building its first land-based casino. It allowed a few economically challenged cities the ability to vote on whether they wanted a casino within their borders.

Hard Rock, owned by the Seminole Tribe in Florida, received the license in April to operate the casino in Bristol. It undertook a quick construction schedule to be the first one to open.

The temporary casino has 80,000 to 100,000 square feet of space. It will possess 870 slot machines, 21 table games, and the first brick-and-mortar sportsbook in Virginia with five betting windows and 15 kiosks.

It will morph into a much larger facility that’s set to open in the summer of 2024.

Events marking the opening week kicked off Wednesday with a “friends and family” event inside the temporary spot and visiting two of the restaurants available. Friday morning, the media gets its first look at the facility. There is a grand opening event slated to begin at 11 a.m., and the doors open to the public by Hard Rock President Allie Evangelista at 2 p.m.

Then it’s game on.

Phase 2: rocking all day and all night in Virginia

Plans for the larger permanent Virginia casino paint a lavish picture of gambling and entertainment. Offerings will expand to 2,700 slot machines and 100 table games open.

There will be five restaurants, four bars, and a Rock Spa with seven treatment rooms for relaxing after a big win or easing the tension after a loss. It will have an indoor and outdoor entertainment venue and be open 24-7.

“I want to tell you I had a meeting with Virginia Lottery today and the test day was very successful,” Evangelista said Wednesday at an employee gathering to celebrate Opening Day.

Bristol knows how to go fast and big

People could say the opening of the temporary casino in Bristol is the biggest thing to ever happen in the small Virginia town (population 17,219), but that would not be correct.

Bristol, which has a sister city in Tennessee, is home to one of auto racing’s most popular and largest tracks, the Bristol Motor Speedway.

Hailed as the “World’s Fastest Half-Mile” the Speedway seats 153,000 fans for NASCAR events, including the Bass Pro Shops Night Race on September 17. That race, which takes place under the lights, is part of the NASCAR Sprint Cup’s playoff series.