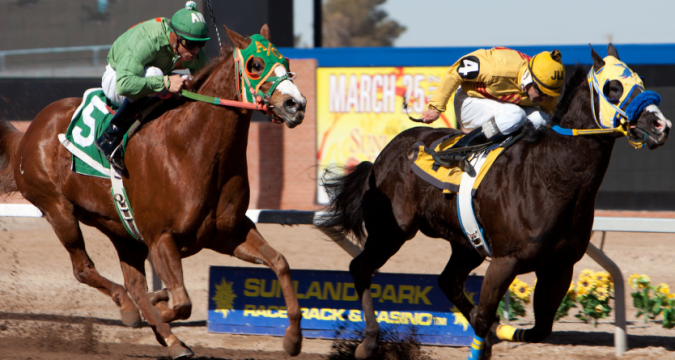 A long-running dispute over the use of casino subsidies for horse racing in New Mexico has put the state’s Horsemen’s Association and the New Mexico Racing Commission at odds like siblings wanting to play with the same toy. Recently, the “adult” stepped into “the room” and took a big step toward settling the matter.

The state’s attorney general has thrown its weight into the feud, firmly on the Racing Commission’s side. It could mean less autonomy for the Horsemen’s Association but more consistent funding for purses at the state’s racetracks.

Last week, New Mexico AG Hector H. Balderas issued an opinion regarding accounts for the deposits of gaming funds for purses. The opinion came from a request the Commission made months in advance.

Rules state that racetracks are entitled to 20% of the net take from New Mexico casino gaming. An updated rule removes the Horsemen’s Association as the bearer of the accounts that contain those funds. Instead, the individual racetracks are now responsible for those accounts.

That strikes at the heart of the fight between the Commission and the Horsemen’s Association. The AG’s ruling might not signal the end of what’s become a standoff, however.

New Mexico’s battle over control of funds has ranged wide

That, along with the shift of the control of the casino subsidy accounts, prompted prior challenges in state courts. Last June, Commission Chairman Sam Bregman insinuated the Association was unnecessary.

“New Mexico horse racing will continue to prosper with or without the New Mexico Horsemen’s Association.”

While those matters remain in litigation, it remains to be seen if the AG’s opinion will spur the Association to comply with the new rules. An opinion and actual enforcement are two separate matters.

What could happen now for New Mexico?

The figurative ball is effectively back in the Association’s court now. The AG’s opinion simply means that in the state’s view of Commission rules, the Association has no legal authority to ignore the new standards.

There are still many options for the Association. Among them are to comply with the rules while its lawsuits play out. Another is to cite the outstanding litigation as a reason for continued non-compliance.

Doing so would effectively be wagering that the AG wouldn’t actually seek to enforce the rules. The state’s AG could cite non-compliance and seek an order from a judge in the state to freeze the Association’s assets or take control of them.

What’s certain is that the AG’s opinion raises the stakes in this dispute and that the Commission has the backing of the state’s highest law enforcement body on this issue. It could still be many months before both sides go to their separate rooms and drop the dispute, though.