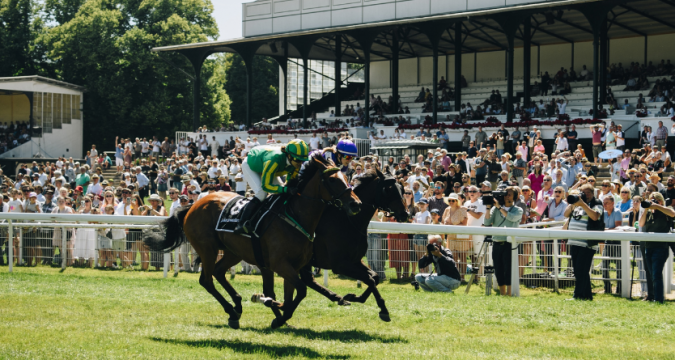 Caesars has brought its Racebook to the Western States.

Caesars and NYRA Bets, which is the wagering platform for the New York Racing Association, have launched its Racebook betting app in Oregon and Montana, making them the fourth and fifth states where the application is available.

The partnership of the gaming giant and horse racing company started in January with the goal of making off-site betting on horse racing available on a new platform.

The app includes race replays and handicapping insights and offers the chance to bet on races at Belmont Park, Saratoga Race Course, Del Mar, Santa Anita, and Keeneland, among others.

Previously, the app came to Florida, Ohio, and Indiana.

“The launch of Caesars Racebook is an important milestone as we continue to add wagering opportunities for our customers and live streaming content for the first time,” said Senior Vice President and Chief Development Officer for Caesars Digital Dan Shapiro in a release.

Caesars Racebook offers pari-mutuel wagering, which had a total handle of $12.2 billion in 2021. The app also gives users a chance to earn exclusive experiences.

Caesars is the host of the National Thoroughbred Racing Association’s National Handicapping Championship in Las Vegas and has plans to build and open a racino in Columbus, Nebraska.

“The new Caesars Racebook app, which uses the NYRA bets interface and technology, will expand access to world class horse racing now and in the future,” said Matt Feig, the general manager of NYRA Bets.

“The partnership between NYRA Bets and Caesars is a win for horse racing, its stakeholders and countless racetracks across the world.”

What’s next on the horse racing calendar?

The Triple Crown races are complete, with each race being won by a different horse. The prestigious Ohio Derby, sort of the second tier behind the Triple Crown, was run last weekend. It was won by Tawny Port, who was seventh in the Kentucky Derby.

The Belmont Derby and Belmont Oaks are on July 2 at Belmont Park and will be available for bettors on the app. The biggest race left in the summer is the Haskell Stakes at Monmouth Park in New Jersey on July 17.

Where do the horse races run in Oregon and Montana?

The Montana horse racing industry has tapered off over the years. There are weekend races in July at the Great Falls Turf Club, and races run this past May at the Miles City Bucking Horse Sale.