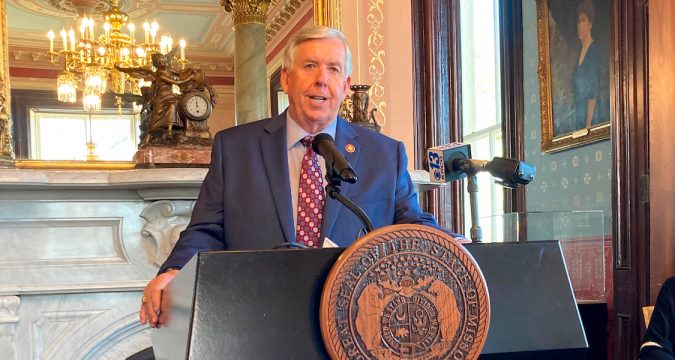 The Missouri legislature probably feels like a kid whose parent continually says, “No!”

Lawmakers are in a special session right now to discuss cutting state income taxes. While several of them want Gov. Mike Parson to add sports betting to the special session, the governor’s spokesperson, Kelli Jones, said that’s a no-go.

“Sports betting is clearly beyond the call and does not relate to Governor Parson’s topics in the call,” Jones told the St. Louis Post-Dispatch. “I do not anticipate sports betting being a part of special session.”

The governor’s hard line against sports wagering discussions is a blow to betting proponents who hoped to get the bill into the special session. Jones said the governor believes the issue should be taken up in the spring legislative session.

Sports betting at a standstill as Kansas booms

There seemed to be hope among lawmakers that sports betting would make its way into the special session. A House panel on emerging issues discussed the bill on Monday, then postponed further action on the bill. That pause on action is likely due to the governor’s desire to postpone legal sports betting movement until the spring.

In the meantime, lawmakers and Missourians are left to watch Kansas’ sports betting market grow and mature. The neighboring state launched legalized sports wagering earlier this month. Bettors can place wagers on their phones or in-person at several locations throughout the Sunflower State.

The launch gave Missouri legislators a glimpse at what could be for their state, not only because of the revenue generated by their rival, but because of another key metric: how many people tried to use Kansas betting apps from Missouri.

The bill in the House right now is HB4. Earlier this week, the House’s emerging issues committee allowed public comment on the bill. Among the entities that support the bill include:

Key provisions in the legislation include a 10% tax on gross gaming revenue from operators and an initial application fee of up to $100,000 for sportsbooks on gambling boats and up to $150,000 for mobile operators.