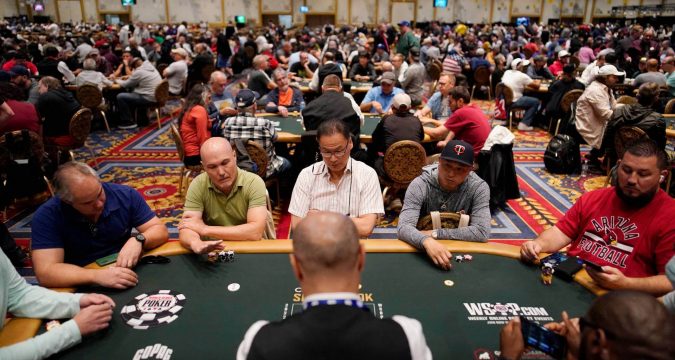 The 2022 World Series of Poker is heading into its final weekend and that means one thing. The series’ most coveted bracelet is on the brink of being awarded.

The final 10 players head back this afternoon at 2 p.m. to start the final table of the $10,000 no-limit hold’em main event. (Well, technically it’s the unofficial final table since the event was played nine-handed.) It takes place at the Las Vegas version of popular US casino brand Bally’s.

The original plan was to play down to the final nine players on Wednesday night, but it took 17 hours to trim the field to 10. Since the WSOP combines to one unofficial final table when there are 10 players remaining for every no-limit hold ‘em event, and it was nearly 7 a.m. when Robert Welch was eliminated in 11th place, officials decided to wrap up for the night and bring the final 10 back today.

Normally, the final table has one or two players that pulled away from the pack. But this year, the chip counts are more tightly packed than in past years. Furthermore, the field is chasing two players that are dead even in chips.

Washington, DC native Matthew Su and Norway’s Epsen Jorstad are tied for the lead with 83,200,000 chips each.

The plan for today is to play down to the final four players before bagging up for the night and returning on Saturday to crown a champion.

Souki is the short stack at the final table and one of two British players remaining. The 33-year-old London-based poker pro racked up $830,812 in career tournament earnings. And that is before he adds a main event cash to his resume.

He has live tournament cashes dating all the way back to 2010, but he didn’t start playing mid and high-stakes tournaments until 2014. It’s his second sizable score of the summer. Last month, he finished fourth in a $1,600 no-limit hold’em event at the Wynn Summer Classic for $102,214.

“It’s a dream come true, of course,” Souki told PokerNews. “I don’t know how I got here, I can’t even remember the journey, it’s been such a wild ride, but super grateful to be here. I feel blessed. I have a short stack, but we’ll see what we can do.”

Attenborough is another one of the six non-American players at the final table. The 28-year-old from Smithfield, Australia starts the final table right in the middle of the pack sixth in chips.

However, the Aussie currently resides in Las Vegas and plays high-stakes cash games for a living. Despite the cash game background, he owns one of the more impressive tournament resumes of the bunch with more than $1.4 million in career tournament cashes.

Normally, Attenborough would be slightly handcuffed by his chip position. The large pay increases that happen with every elimination put a ton of pressure on middling stacks to play tight and outlast short stacks to get those pay jumps.

However, since the chip counts are tightly packed together, he has a little bit of wiggle room. He could be a real threat to win if he moves up the chip counts.

By making the final table, Dobric made himself the answer to random poker trivia. The 32-year-old became the first Croatian to make the WSOP main event final table.

Despite just shy of $240,000 in career tournament earnings, Dobric was already eighth on Croatia’s all-time money list. He will start the final table third in chips behind just Su and Jorstad.

Unfortunately for Dobric, the two chip leaders are on his left, with Su just two to his left. The position of Dobric in relation to the chip leaders will make it much tougher for him to navigate through today’s action.

Duek is a bit of a wild card at the final table. He’s one of the few players without much of a resume. The 41-year-old had just four recorded tournament cashses, but one of them came in the $25,000 pot-limit Omaha high roller event.

So regardless of his background, the money won’t intimidate the Fort Lauderdale resident. According to other media outlets, Duek plays mostly pot-limit Omaha, which makes sense given the lack of PLO tournaments around the world.

Duek starts the day seventh in chips and has a horrible seat to the direct right of chip leader Matthew Su. Given how short-stacked Souki is, Su can apply a ton of pressure to Duek if he enters the pot before one or two shorter stacks are eliminated.

The Floridian has been quite a survivor throughout the tournament. Outside of finishing near the top of the Day 2 leaderboard, Duek was typically in the middle or near the bottom of the chip counts at the day’s end.

Su gets to live out every poker player’s dream. Take the chip lead into the final table of the WSOP main event.

Unlike the other players at the table, Su can pick and choose when he wants to enter pots and apply pressure. As the chip leader, or in this case, co-chip leader, the 34-year-old really can’t be eliminated.
Technically, Jorstad could end his night early. However, the two big stacks typically don’t play big pots against one another unless there are two very strong hands involved.

Prior to the main event, Su only had $49,340 in total earnings spread out over three cashes.
As a competent poker player from the D.C. area, it’s likely he was playing high-stakes cash games at nearby MGM National Harbor. Especially since his three tournament cashes were all high-stakes buy-ins.

Eames is the other British player at the final table. However, unlike Souki, Eames was already an established pro before the summer started.

The 33-year-old from Southport will be one of the toughest players at the table. Since he’s fifth in chips, not far behind the two leaders, he’ll have an opportunity to chip up and make a run at the bracelet.

Since he came into the event with just shy of $2.2 million in career earnings, if he can outlast one player, he’ll crack the $3 million mark on his resume.
Although it’s not a WSOP bracelet, Eames already has a piece of WSOP jewelry. He won the $1,675 WSOP Circuit main event at Planet Hollywood in 2014 for $289,706.

Heading into Day 7 two days ago, Farnes was the chip leader. The Idaho native survived the day, but will be one of the shorter stacks.

The 39-year-old started playing poker in 2004 but lacks experience in high-stakes tournaments. Most of his cashes come in mid-stakes events.

Prior to the main event, his largest cash came earlier this summer. He finished seventh in a $2,500 no-limit hold’em event at the MGM Grand for $61,250. He is already guaranteed a cash that is worth nearly four times his career tournament earnings.

Duczak is the lone Canadian at the table and is a veteran of the WSOP. The main event is his first WSOP final table. But his $156,927 worth of cashes in WSOP events make up more than one-third of his total earnings.

Duczak had quite a day on Wednesday. He started the day 23rd of 35 players remaining. But by the day’s end, he was fourth in chips of the final 10.

Jorstad’s seat at the final table could make for one of the more interesting dynamics. The 34-year-old Norwegian is tied for the chip lead with Su. However, he is on Su’s left and has the second-shortest stack on his direct left.

The way the chips are situated, it could allow Jorstad to come out with an ultra-aggressive strategy. As a result, he could find himself pulling away from the rest of the pack and making this a race for second.

Jorstad’s live tournament resume lacks a ton of results, but don’t let that fool you. He’s a very talented high-stakes online cash game player. Jorstad dabbles in online poker tournaments as well on PokerStars and GGPoker under the screen names “Hymn2ninkasi” and “COVFEFE-19.”

The 34-year-old New Yorker is by far the most accomplished tournament player remaining. However, Conniff is facing a disadvantage as the second-shortest stack in the tournament. He’s only ahead of Souki, who is on his direct left.

The main benefit Conniff has today is that he’ll be able to shove on the shorter stack of Souki, instead of facing the shoves from the short stack.

Here are the final table payouts: