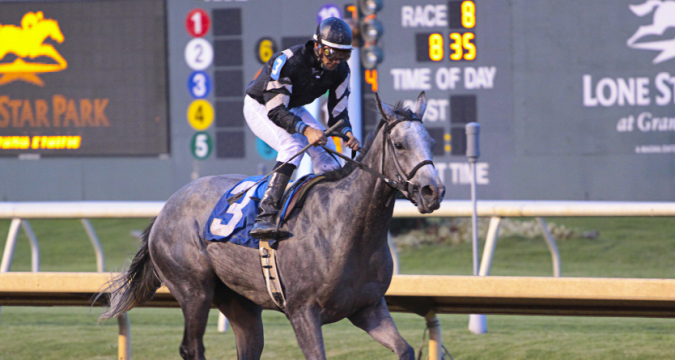 The silver anniversary season at Lone Star Park at Grand Prairie will include plenty of gold and at least one Elvis sighting.

Opening Day will include a 25th Anniversary cap giveaway for the first 1,000 fans, plus music from an Elvis-inspired act. Lone Star Park will also honor renowned trainer Steve Asmussen, who recently became the all-time winningest trainer in North America and is an Arlington resident.

Despite all those victories, Asmussen has never won a Kentucky Derby. He has one of the favorites, Epicenter, entered in this year’s Kentucky Derby on May 7.

Texas horses, stars and money come out at Lone Star

Asmussen has the most wins in Lone Star track history and owns 14 training titles at the track in his career. He had 71 victories at Lone Star in 2021 and 50 in 2020.

Both men credit a tax passed by the Texas legislature in 2019 guiding a portion of sales of horse feed and supplies into purses.

“The quality has improved dramatically in a short period of time, regardless of the caliber of the race,” said Broberg in a press release.

“You’re seeing old faces that had abandoned Lone Star come back as well as new faces. People are just running their better stock there, as opposed to the lesser stock that they were able to get away with for those who had split stables.”

“With all the trials of horse racing now, the agriculture tax that Texas has in place that is supplementing their racing is proving to be very effective,” agreed Asmussen.

“I think the last couple of Texas sales have been up dramatically, which means better horses get to run for more money.”

“I felt last summer was the best quality of horses they’d had there since the early days of Lone Star, so I thought it required a bit better horse to win the maiden and allowance races. You get better purses, you get better horses, fuller fields. It’s a domino effect, and I think you’ll see more of that this year.”

The increased purses also attract a better class of jockeys. Stewart Elliott is the defending Lone Star riding champ and is coming off a title at Sam Houston.

Highlights on the Lone Star card

Lone Star is going all out for its silver anniversary season. Opening Day will feature the Bluebonnet Stakes for Texas-bred fillies and mares, three years old and up.

May 1 features a crawfish boil and Louisiana-themed zydeco music. Dog races are scheduled for May 22, extreme racing day (camels, zebras, and ostriches) June 25-26, and fireworks on July 3 and July 4.

What to know before you go to Lone Star Park

Lone Star Park is off of I-30 on Beltline Road. General admission is $5 every live racing day but $10 on Kentucky Derby Day. Reserved seating prices range from $5-40. General parking and handicap parking are free, and valet parking is available.

The season runs most Thursdays through Sundays. The first post on Thursdays and Fridays is 6:35 p.m. local time and 1:35 p.m. Saturdays, Sundays, and Mondays.

The grandstand can hold approximately 8,000. Quarterhorse season runs from Sept. 16 to Dec. 17, with gates opening at 5 p.m.