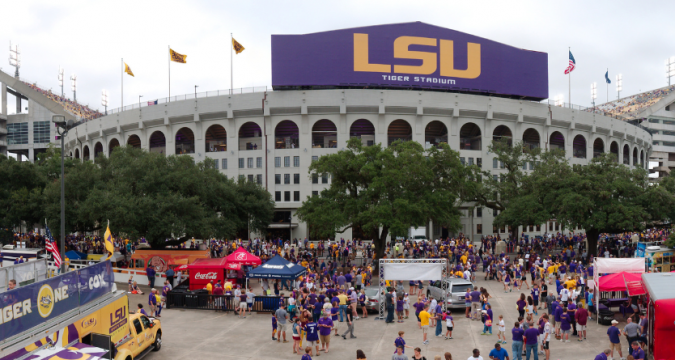 Growing up, my friends would tease me about rooting for the teams at LSU, or as they called it, Loser State University.

Meaning Louisiana sports bettors are the biggest losers of all time for a one-month period. Throw up the L!

It’s the biggest win (or loss rate depending on whether you’re the house or the gambler) for any state since PASPA was revoked back in June 2018.

The overall numbers for mobile sportsbooks in Louisiana are even worse. Mobile operators got $23 million in revenue from the $142.6 million bets, which are a 16.1% take home for the house.

What did Louisiana lose in? Basketball mainly.

In April, New Orleans hosted the Final Four, and the bettors won big, most riding Kansas all the way to the NCAA title, so the number is a bit skewed. In May, the New Orleans Pelicans had been eliminated from the NBA playoffs, so I guess the rest of the Louisiana sports betting public just had no instincts from there on out.

The previous best win rate for the operators was New Jersey in September of 2018 at 13.1%. This is easy to explain. The New York Jets and the New York Giants started 1-3 that year. The Giants even lost to Jacksonville in Week 1. No way there was a lot of action on the Jaguars in New Jersey for that one.

I don’t try to defend my home anymore. We’re just about last in Education (48th, thank you so much) but first in festivals and Mardi Gras. The State Police is about the only authority anyone listens to – that’s why they are trusted with the revenue numbers.

At least the New Orleans Breakers are in the USFL Playoffs, and the Saints are going to be better than people think.

There is a mindset being from Louisiana that we’re just here for a good time, not a long time. We eat weird food, listen to loud music, and find any reason for a parade. And we have lost before. Who suffered the second-biggest comeback loss in college basketball history? LSU.

Who lost on the NOLA No-Call to the Rams in 2018? We did. How about the Minneapolis Miracle? Saints too. Does Seahawks BeastQuake Touchdown run? That would be against us.

So we will take the L proudly. I’m sure it was fun while it lasted.