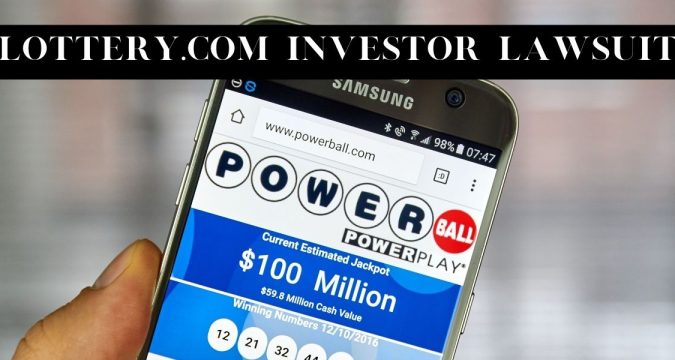 The potential downfall of a once rising US online gambling company continues to play out right before the eyes of investors. Some of the investors in Lottery.com are not content to passively watch the carnage, however.

On Tuesday, Lottery.com became the defendant in a potential class-action lawsuit that alleges the company’s leadership deceived investors and their improper conduct led to shareholders’ financial losses. Other bad news for the company came almost simultaneously.

A dark day for a US online gambling company

On Tuesday, NASDAQ informed Lottery.com, an online lottery ticket courier service, that it is out of compliance with the market’s quarterly report mandate. NASDAQ requires all companies listed on its exchange to file reports for the second quarter of each calendar year by June 30.

Lottery.com’s statement does not provide any kind of timeline for the completion of the report. NASDAQ has warned that further sanctions could be coming if Lottery.com does not file the report by Aug. 31.

Currently, that’s just one of the company’s worries, though. It has another big problem that surfaced on Tuesday as well.

Particulars of the US online gambling lawsuit

On Aug. 19, lead plaintiff Preston Million filed his complaint in the federal court for the Southern District of New York. Along with Lottery.com, he named Trident Acquisitions Corp., Matthew Clemenson, Anthony DiMatteo, and Ryan Dickinson as defendants. On Tuesday, the court issued a summons for the defendants.

Lottery.com went public in October of 2021. Trident is a blank check company (a company that has no actual product or service and only exists to acquire or merge with another company) that merged with Lottery.com in December of 2020.

DiMatteo is Lottery.com’s CEO. Clemenson and Dickinson are former executives with the company. Both were either fired or quit in July 2022. Million says he purchased shares of the company and the class he proposes will include all groups or people who purchased stock in Lottery.com between Nov. 15, 2021, and July 29, 2022.

As the termination dates of Clemenson’s and Dickinson’s employment with the company suggest, July was a significant month for Lottery.com. Significantly poor, that is.

Things started to unravel for Lottery.com in July

On July 6, Lottery.com filed a Form K-8 with the United States Securities and Exchange Commission. That body regulates stock markets and a K-8 Form is essentially a report that publicly traded companies must file with the Commission whenever an event that is of interest to shareholders happens.

While not all K-8 filings always mean bad news, as sometimes it’s simply as mundane as a promotion of a new executive, this filing did not represent good news to anyone. The document stated that an audit of Lottery.com uncovered “instances of non-compliance with state and federal laws concerning…order fulfillment” and “issues pertaining to the Company’s internal accounting controls.”

That was when the Lottery.com Board of Directors fired Dickinson and less than two weeks later, Clemenson resigned. On the same day Clemenson quit, another K-8 shared that Lottery.com actually had $30 million less in cash on hand than it had previously stated and it had a corresponding amount of “improperly recognized revenue.” But wait, there’s more.

On July 29, a third K-8 plainly stated Lottery.com lacked “sufficient financial resources to fund its operations or pay certain existing allegations.” Throughout all this activity, prices of LOTR fell from $1.22 per share on July 5 to just $0.29 per share on July 29.

Million’s lawsuit states that since Lottery.com went public, it has lied about its accounting and compliance practices, swaying investors to fund a company that was incompetent. The complaint alleges the diminishing stock price is due to not only poor practices but that lower stock price represents a financial loss for investors.

Considering this lawsuit and the NASDAQ notice, Tuesday was just about as bad of a day as any public company has ever had. There are some more painful days ahead, however, as the remaining leadership tries to navigate the issues.