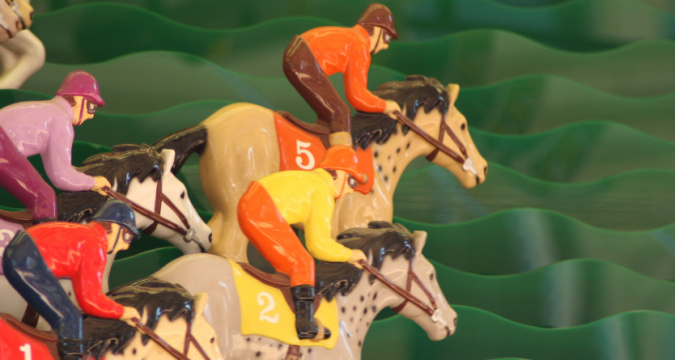 Sigma Derby may be the most popular casino game that most gamblers have never heard of. While the mechanical horse racing game has an intense cult following, there’s only one active Sigma Derby machine in US casinos today.

This summer, The D Hotel and Casino in downtown Las Vegas is celebrating being home to the Sigma Derby for 10 years. The game has been the centerpiece of the second-floor casino since owner Derek Stevens purchased the downtown Las Vegas property formerly known as Fitzgeralds.

Stevens has a personal affinity for the mechanical horse racing game from the 1980s. He’s the only casino operator in the country willing to keep the game alive. He shared the following about Sigma Derby:

“I always had a special place in my heart for Sigma Derby and it was perfect for the vibe we were going for. The game has a true fan following and we’re proud to have put in the time, effort and mechanics needed to keep those horses trotting for 10 years.”

Sigma Derby is not an easy game for a casino to operate. Since the game hasn’t been in production for many years, there aren’t many people that can fix the nearly 40-year-old machine. Additionally, it’s difficult to find parts for the machines.

This all adds up to Sigma Derby being an expensive venture for Stevens.

Horse racing games have come and gone from casinos all over the country for years. Even though there’s only one remaining in casinos, Sigma Derby has held on to its place as the most popular game of this type.

How The D Las Vegas Casino is celebrating Sigma Derby

Every hour between 11 a.m. to 4 p.m., The D will give away 10 t-shirts to those who are actively playing the Sigma Derby machine. This will happen at random times each hour.

The D is giving away a different t-shirt for every day of the promotion. Giveaways are limited to one per person while supplies last.

Sigma Derby was introduced to casinos in 1985. The mechanical horse racing game has seating for 10 players. Looking back, this was one of the first social community casino games.

Sigma Derby’s gameplay was and is still very simple. The cost to play the mechanical horse racing game was only a quarter in the mid-1980s.

Horses bounce around the track guided by magnets underneath. The game looks and plays like it was cutting-edge technology in the 1980s.

This old technology is part of the appeal today, where games operate smoothly with crisp graphics. It’s a throwback to a different era that appeals to gamblers of all ages.

One reason the game is so popular at The D today is that it still only costs 25 cents to play. This is a comparative bargain in 2022, where a “penny slot” wager can be almost $10.

For 25 cents, players simply need to choose which two of the five horses racing will finish first and second – in that order. The wager is known as a quinella to those not familiar with betting on horse races in this style.

Players can wager multiple quarters per combination. They can also bet multiple quinellas for a single race.

Sigma Derby has a total of 10 possible two-horse combinations available to bet. Playing this horse racing game never gets too expensive.

The horse races are automated and take place every 90 seconds. There are 30 seconds to consider a wager between races, so there’s never a dull moment sitting at a Sigma Derby machine.

Sigma Derby remains a game that uses quarters. It’s one of the few coin-operated games still available in a Las Vegas casino.

Players either bring their own quarters to the casino or visit a change machine in order to have funds that work. Like the games in the 1980s, Sigma Derby at The D does not accept dollar bills.

The concept of the game was so popular for a time that casinos had their own versions. The Luxor had Camel Derby to go along with its Egyptian theme. Caesars Palace had Chariot Derby.

According to the website, the house edge for Sigma Derby at The D is about 20%. The information is dated, but if it’s still accurate, this is about the largest house edge for any casino game today.

Sigma Derby has always been a popular US casino game because it’s simple to play, cheap, and a different kind of gambling experience. Over the years, the preferences of gamblers have changed, and the demand decreased.

Sigma Derby at The D in downtown Las Vegas

Even though Sigma Derby has a large house edge, its low limits have made it unprofitable for most casinos today. Sigma Derby is as much of a tourist attraction as it is a way to gamble for those visiting downtown Las Vegas.

Sigma Derby has become an iconic US casino game since it was first introduced. The scarcity and memories from playing Sigma Derby also make this an attraction.

Sigma Derby has a very active Facebook group. Members regularly share tales and pictures when visiting The D to play the mechanical horse racing game. Photos of the rare 200-1 winner are among the most popular in the group.

The group is useful to see updates on whether or not Sigma Derby is operational. The game breaks down quite often, but fans of Sigma Derby celebrate the game as often as possible.

Stevens and The D also salute the iconic vintage horse racing game. The casino is never shy about using the game as a marketing tool. While the number of fans shrinks as years go by, the horseplayers have a love for the game that is unmatched.

Personally, I’ve brought countless friends to The D over the years just to see or play Sigma Derby at their request. The game evokes memories for older visitors and peaks the curiosity of younger tourists.

Other non-traditional US casino games

Sigma Derby is a unique game for multiple reasons. Different horse racing games have come and gone over the years, but they tend to go away relatively quickly.

Today, horse racing game fans will find Fortune Cup at casinos throughout Las Vegas. The four-year-old game has lasted longer than most of its predecessors.

Fortune Cup plays much smoother and has more ways to wager than Sigma Derby. It’s also more expensive to play since there are more ways to bet, and the minimum is at least $1 per wager.

While casino guests play Fortune Cup, the fervor for the game isn’t close to being the same as Sigma Derby.

While Fortune Cup remains in casinos, that’s not the case for most machine games that aren’t slots. Most non-traditional games receive a trial and are quickly moved off the gaming floors.

Gamblers often look for games that are somewhat familiar to play. That’s the case with one of the most popular non-traditional machines that are still popping up in casinos.

The Go Go Claw Cash Grab game from Aruze is available in casinos throughout Las Vegas. This game mimics the claw games that have been in amusement venues for years.

The difference is that the Go Go Claw game is that it’s a casino game where the prize is money. While it doesn’t look like a typical slot machine, Go Go Claw uses a random number generator like slots.

There’s no skill involved in playing Go Go Claw. Like a slot machine, the result occurs at random when gameplay begins.

Maneuvering the claw doesn’t matter regardless of how skilled a player thinks they are. This game is geared toward recreational gamblers who aren’t typically concerned about how games are operated.

Despite the randomness of the game, those playing the game love to manipulate the claw to try and win a cash prize.

There’s always a crowd around the Go Go Claw games. The game tugs on the memories of gamblers that used to play this game for prizes outside of casinos.

Gaming manufacturers are always looking for unique games for casinos to offer customers. There are always unique games in the pipeline, and we’re here to explore them as they’re released.