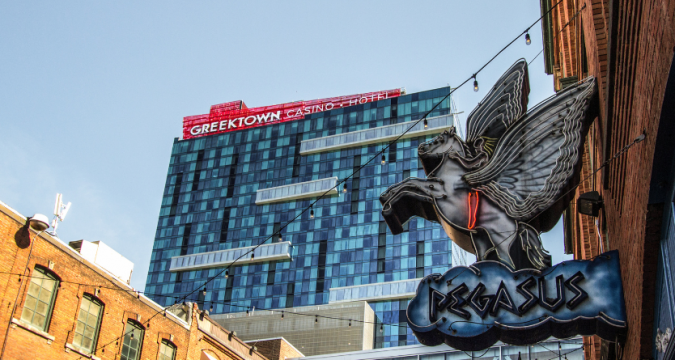 Perhaps the greatest tool to market a spend of tens of millions on a renovation into Greektown Casino-Hotel is a new name. The property has already clued guests into what its new moniker will be ahead of the unveilings of the newly renovated spaces.

The biggest changes in the property in almost three years involve not only gambling at the casino but many of the amenities as well. The casino aims to make patrons feel like Hollywood royalty with all the improvements.

Kayla Clarke of ClickonDetroit reports that on May 1, the Greektown will officially become the Hollywood Casino at Greektown. Hollywood is one of several brands that casino owner Penn National Gaming operates.

“Whether you’re a regular, loyal guest or a first-time visitor, we’ll have something new and improved for you to experience and enjoy.”

Penn National acquired the casino and hotel in May of 2019. The previous owner was JACK Entertainment, which still operates casinos in neighboring Ohio. As Drake alluded to, the name is really just the packaging. Other elements of the rebrand are more substantive for players.

On top of the $30 million put into the hotel lobby, the casino spent a lot more to redesign all of its guest rooms. Both hotel guests and those who are just visiting can check out new dining options.

That includes a new location for the popular Detroit Taco Company in the Monroe Market food hall. The renovated hotel lobby features Rock Bar and Urban Cocktail lounges plus a new upscale Dunkin’.

Prism, a steakhouse on the property, also has a new menu. Penn National spent another million on improvements to the casino’s parking options. The focus of that was a VIP garage that is connected to the upper-level gaming floor.

For all players, though, there is a new integration that could make gambling easier and safer. Guests can now use the mychoice rewards app to access the cashless gaming function at the casino.

With the mywallet section of the app, patrons can play their favorite slots and table games without the use of cash or a card. The app tracks players’ rewards, and they can use the app to add funds or withdraw winnings.

While Detroit might be far from Sunset Blvd., the Hollywood aesthetic is coming to this Michigan casino through this rebrand.