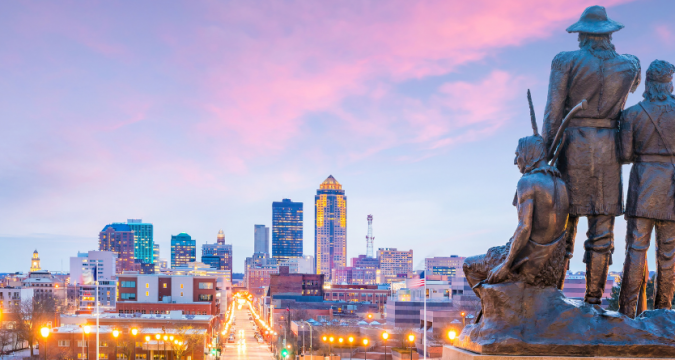 2022 gubernatorial elections might not be on the minds of many Midwesterners in the US in May. However, the way they vote in November could determine the course of gambling expansion in three Midwest states.

In all three of these states, recent legislative efforts have dealt with online gambling. They all could see renewed efforts in their next legislative terms, perhaps with new occupants of their chief executive offices.

This is the third of a four-part series that looks at the most important of those races in regards to legal gambling in the US. The first installment covers elections in the southern US, while the second looks at the same in two northeastern states.

2022 elections for governor in the midwest

To be thorough, these three states aren’t the only Midwestern states with gubernatorial elections this year. Kansas is also among those, as is Wisconsin.

However, these three states are among those where gambling issues are most likely to become an important debate the respective legislatures take up after these elections. Thus, the next governors in these states could hold a lot of sway over what, if anything, happens there.

In two of these states, the incumbents who are running for another term have held office during significant expansions of gambling already. In the third, the incumbent might prove the lesser of two evils for gambling interests.

Will the Pritzker administration in Illinois endure?

J.B. Pritzker has been in office in Illinois since 2019 and has overseen the largest expansion of gambling in the state’s history. That included new brick-and-mortar Illinois casinos, retail sportsbooks, and online sports betting.

As the conversation has turned to iGaming legalization in the state, he has avoided taking a stance on that issue, however. While Beverly Miles will mount a primary challenge to Pritzker this summer, it does not look like Pritzker’s lack of messaging on gambling will affect that race.

The Illinois Republican primary field is one of the widest in the country right now, with nearly a dozen candidates. Among the contenders is former Illinois state senator Paul Schimpf, who advocated for more funding for horse racing in the state during his time in that office.

Other than that, however, candidates have kept their sentiments on the gambling industry close to the vest. Illinois residents will narrow their field of candidates down in a primary on June 28.

If Illinois is to legalize iGaming anytime in the next four years, Pritzker or his successor will have a lot to say about that. However, it does not appear that issue will be a difference-maker in the race.

At this point, it’s hard to read what exactly Pritzker losing a re-election bid or his winning another term will mean for online casinos and online poker in Illinois. To date, though, Pritzker has yet to take an oppositional stance to gambling expansion.

Is another Reynolds term good for gambling in Iowa?

To date, Iowa Gov. Kim Reynolds has mostly taken a neutral stance on gambling. She signed sports betting legalization into law in 2019 after the legislature passed it but was not among the advocates pushing for the change. As the Iowa legislature has lightly considered online gaming legalization, she has avoided taking a stance on the issue.

So far, no one has arisen to challenge Reynolds in a primary battle for the Republican nomination. Thus, it appears she will appear on that ballot unopposed in June. The same unopposed status appears likely for Democratic front-runner Deidre DeJear. DeJear has made no policy statements involving gambling in Iowa so far in the course of her campaigning.

As Iowa’s legislature has flirted with legalizing online casinos and online poker play, the state’s next governor could play an important role in whether that does happen or not within the next four years.

Another term for Reynolds seems to be the preferential situation for gambling proponents. Her conservative politics have thus far not run afoul of gaming interests. However, there’s no indication that DeJear’s election would present an obstacle.

The bigger issue for any possible gaming expansion in Iowa in the near future seems to be convincing enough of the legislature’s members that doing so is a priority.

A change in St. Paul, Minnesota could be bad for gaming

With the possibility of Minnesota sports betting dead for now, current Gov. Tim Walz has punted on pushing on the issue in any way.

In the past, Walz stated he would not call the legislature into a special session to work on such a bill. Beyond that, he’s been non-committal in terms of whether he would sign such a bill.

Walz will run unopposed in August’s Democratic primary, but there is no current counterpart for him on the Republican side. That’s because the Republican primary will have many choices. Among them is former Minnesota Senate Majority Leader Paul Gazelka, who opposed sports betting legalization during his time in that role.

The other half-dozen challengers for the Republican nomination have not made gambling expansion in the state an issue in the race. Whether Gazelka or any of them would do so in the general election is uncertain right now.

Walz has been far from enthusiastic about the possible legalization of sports betting, but he hasn’t been antagonistic either. The legislature has counted this among its priorities in the current term. That suggests a continuation into the next session should the legislature fail to come to an agreement in this term.

Should Gazelka win the Republican nomination and then the general election, getting a bill across the finish line might become more difficult. To be clear, Gazelka has not stated he would veto gaming expansion legislation. At the same time, it might be more difficult to sway legislators to support proposals if a veto threat from Gazelka looms.