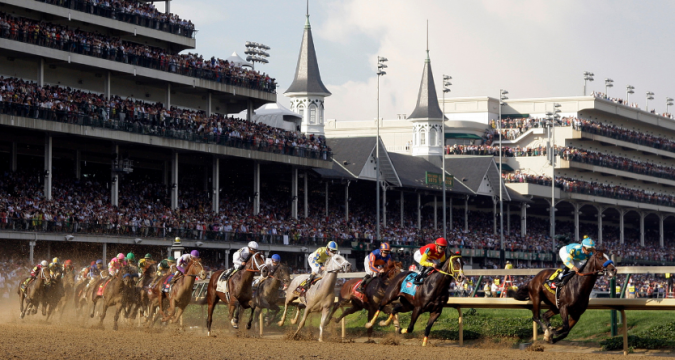 The next two weeks are the Time to Study the Field, and the 37 Derby prep races are complete. The 20-horse field isn’t locked in just yet, because some horses could back out, or trainers might choose to skip the race.

PlayUSA has locked in on 12 of the top contenders for the upcoming Derby. It may be too early to place your Kentucky Derby bet yet, but when the time comes, you will be ready.

The son of Not This Time is the winner of the Louisiana Derby and has won four races in his career. Asmussen, a two-time winner of the Eclipse Award for Outstanding Trainer, has never won the Derby before. That will be a big storyline leading up to the race. Epicenter finished with the most Derby Prep points with 164.

Here’s another trainer looking for his first Derby win. Zandon was last in the Blue Grass Stakes before coming all the way back to win the mile-and-an-eighth race. He finished third behind Epicenter in the Risen Star Stakes at the Fair Grounds in New Orleans.

White Abarrio looks like a pre-race favorite. He won the Florida Derby and has been triumphant in four of his five starts.

This is perhaps the fastest horse in the field, and well, you know, this is a race. Mo Donegal has a powerful bloodline that includes stars A.P. Indy and Tabasco Cat. He ran 1:47.96 to win the Wood Memorial, six seconds faster than he was at that distance four months prior.

Expect a lot of chatter about Tiz The Bomb leading up to the Derby. He’s already won over $1 million with wins on dirt, turf, and synthetic tracks. He’s been raced eight times and was second at the Breeders Cup Juvenile Turf.

He is the son of Gun Runner, who won the 2016 Louisiana Derby and was third in the Kentucky Derby that year, so he has the bloodline to run a mile-and-a-quarter. Cyberknife is the Arkansas Derby champion.

The Japanese-bred horse has won three of his four starts and has a big-time bloodline that includes both Sunday Silence and Seattle Slew on his father’s side. However, his speed doesn’t compare yet to his American-bred brothers. He won the UAE Derby in March.

If you favor the theory that horses should get to Churchill Downs just reaching their potential, then Taiba is your choice. The California-born grandson of Tapit has only raced twice but finished first both times, including winning Santa Anita. His likely jockey is Mike Smith, who has won two Kentucky Derbies.

Now we are getting down to the longshots category. Simplification won the Fountain of Youth Stakes at Gulfstream but was third in the Florida Derby behind White Abarrio.

Smile Happy beat White Abarrio as a 2-year-old at the Kentucky Jockey Club and won his first two races at a mile-and-a-sixteenth.

Now, if you like betting on a horse that is coming on strong, Tawny Port deserves a look. Tawny Port came back to win the Lexington Stakes but was beaten soundly by Tiz The Bomb in the Jeff Ruby Stakes. He has 1990 Kentucky Derby winner Unbridled on his bloodline.

Another grandson of Tapit, who was ninth in the Kentucky Derby back in 2004, Barber Road ran four races at Oaklawn Park and was second in the Arkansas Derby behind Cyberknife. He has not won as a three-year-old.

What happens when you compare Kentucky Derby times at a mile and 1/8? We took these horses and found their winning times for the same distance. This could be a major clue who the best horse is, or it could all be guesswork.

What’s different about the Kentucky Derby

Prep races are one thing, but the Kentucky Derby is a horse of a different color. With over 140,000 screaming fans and a longer distance to run (a mile and a quarter), horses that have excelled in the run-up to the Derby sometimes falter under the TwinSpires.

Also, a 20-horse field is crowded, and horses that are quick out of the gate have an edge. Closers (horses that make their move later in the race) struggle to get through the large field and have a greater risk of getting mud splattered or tripped.