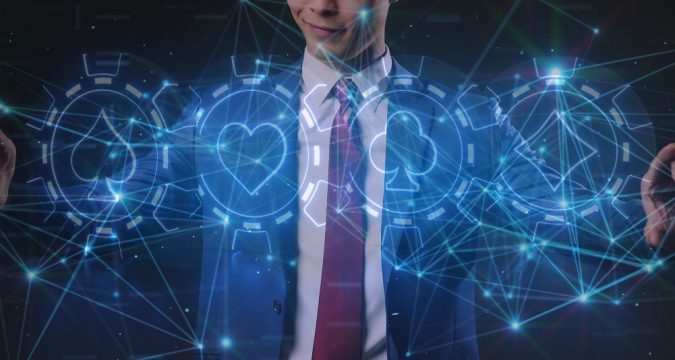 Paul Rogash almost seemed guilty about it, like a SkyNet engineer who knew how this was going to turn out.

“It’s actually scary to me, to be honest,” he admitted on a Zoom call from his home in Bali.

The metaverse has him worried. Actually, it’s the humans.

Rogash has long observed society forgetting how much it collectively missed communal experiences during nearly two years of COVID-19 sequestration. Even in his Pacific paradise.

Tables full of friends. Not talking, not interacting.

Instead, they satiate the rat plunger urges propagated by their artificial intelligence endowed phone apps. They indulged the feed. They scroll.

It’s enough to make Rogash ponder what his company’s plunge into the metaverse would mean. And the impact of BetU, the metaverse-resident gambling company he founded. It’s going to be a great big world in there. He hopes no one gets lost.

“You could actually, potentially live whatever that fantasy or that dream you want in the metaverse,” Rogash said in a video interview with PlayUSA.

“And that’s one of the things we’re playing off with our casino, is where you can live your dreams.

“We’ve got males and females, so you can find a friend. We’ll have the hotel rooms and things. And you can build your own little universe in there. You can go and get entertained, whether it’s at the casino or a disco or whatever it is. But the long-term play, to be honest, it scares me in the fact that people already spend so much time on their phone and outside of reality.”

It figures to be crowded in this digital space despite unending horizons for media companies, pro sports leagues, gambling companies, and banks. Facebook’s parent company has renamed Meta. That’s as all-in as it gets.

Even beyond the Mark Zuckerberg blueprint for every-world domination, a virtual land rush has already begun. Entrepreneurs, both young and old, rich in experience and corporate pedigree, or in youth and disruptor zeal, are gathering capital and business plans.

They come with cold wallets full of virtual currencies for this virtual new world they hope to create. And monetize. Some, like Rogash, have invented their own crypto.

Among the old-salt pioneers is former Walt Disney Co. Chief Executive Officer Robert Iger. He’s now a board member and investor at Genies Inc., whose stated goal is to create metaverse avatars capable of,

“Enabling people to be more comfortable with their true selves in the digital world.”

The gambling sector collectively envisions a 4D playland where new customers are made immediately comfortable in that new digital skin, funding accounts with cryptocurrency and living out Casino Royale dreams in a fantasy that lasts as long a player wants or can afford it.

This upcoming PlayUSA series will explore how the metaverse and gambling will come to define each other’s future.

Metaverse will change how you shop, entertain, indulge in fantasies and vices

In we will go, clunky goggles on faces, into this new realm that maybe not so clumsily can be described as a combination of “Ready Player One” and “The Matrix.”

And hopefully not “Black Mirror.”

Business is already booming, and things have hardly gotten started.

Nearly seven million have visited Nike’s metaverse store ‘constructed’ in the Roblox online game platform and creation system. During the NBA All-Star Game weekend, a virtual LeBron James ‘visited’ the basketball court there and “coached and engaged with players,” according to Nike chief executive and president Jack Donahoe. Just as Wade Watts as avatar Parzival searched for the Easter Egg in the “Ready Player One” realm created by author Ernest Cline, these real-life entities will chase riches in a realm where cryptocurrencies, fan tokens, and NFTs are “legal” tender.

Rules and revenue will somehow hash themselves out along the way, leaving terrestrial lawmakers and sociologists alike trying to keep up.

And just as society and its guardians once decried radio, television, and the internet as the thing that would either spur human evolution or end times. There are many interested parties like Rogash invested enough to be both titillated and wary.

It’s going to change everything. Soon.