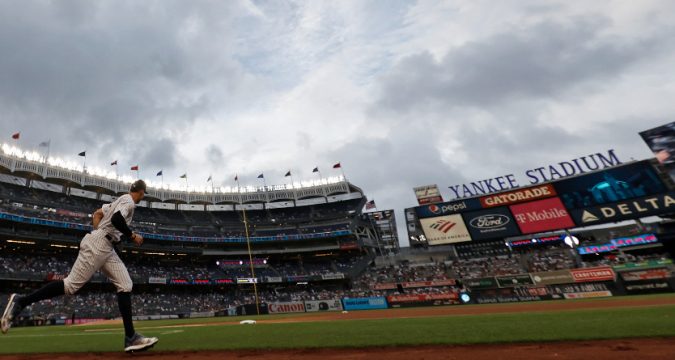 Aaron Judge strides to home plate in the bottom of the first inning. It’s April 8 in the Bronx, a belated Major League Opening Day. The despised Boston Red Sox await from their positions on perfectly raked dirt and immaculately mowed grass. Not a word has been mentioned about a lockout or a collective bargaining agreement.
Judge being here at all makes this more perfect. An order from Mayor Eric Adams three weeks ago allowed unvaccinated players like the outfielder to play in games within the city.
It’s cool. But all is right. It’s spring. Baseball is renewed.
As Judge reaches the dirt behind home plate, a video of his likeness envelopes a massive scoreboard in center field.
“Hi, I’m Aaron Judge for DraftKings. Here’s an Opening Day odds boost. Me hitting a home run in this at-bat is now +500 on the DraftKings app. Please bet responsibly.”
That’s new. To be clear, this scenario is almost assuredly not going to happen.

Not in this overt manner.

Not in this sports-betting-just-got-right-in-your-face way.

But Bet365, DraftKings and FanDuel will seek to exploit their positioning as official partners of the Yankees as much as possible.
Something more subtle involving active baseball players and sportsbooks will eventually happen.

That’s because the collective bargaining agreement that ended a 99-day lockout granted active players – with certain restrictions – the right to enter into sports betting brand ambassadorships, just like Edmonton Oilers center and reigning NHL most valuable player Connor McDavid did with WynnBET.

Will baseball traditionalists, buffeted by ghost runners and DHs in the National League put up with this?

Jacob Pomrenke thinks baseball fans might be more ready for the new reality than expected, even though America’s two most infamous sports gambling scandals involved their sport. His opinion is one grounded in research as the director of editorial content at the Society for American Baseball Research and former head of the Black Sox research committee.

“It’s almost overwhelming to keep up with, what is in the game now that a few years ago would not have even been possible,” Pomrenke told PlayUSA. “But I actually don’t think it’s going to be too much outrage. Overwhelmingly, fans are supportive of sports gambling in general and want to participate. I think the numbers in all the states that have legalized it, show fans are overwhelmingly in favor of legalized sports gambling.

“And so I don’t think there’s going to be any real negative, bad backlash to this because if athletes are endorsing sportsbooks, well, that’s what fans are looking for anyway. I think we’re so used to seeing athletes around the community and supporting various businesses and frankly, legal sportsbooks are just as much of a legitimate business as anywhere else.”

Ten of 30 major league teams have some sort of official partnership with sportsbooks. Many, such as the Yankees, have multiple deals. Announcements came in a flurry in the week before opening day, with the Mets allying with Caesars and the Blue Jays inking a 10-year deal with Ontario-based theScore. The Guardians and Reds figure to announce deals when sports betting launches in Ohio sometime before 2023.
But the Red Sox have multiple collaborations with gambling companies although sports betting isn’t legal there. The DraftKings logo on the Green Monster has become as much of an innocuous part of the backdrop at Fenway Park as the Citgo sign behind it. “It’s almost nostalgic in a way to think of athletes and sports not being involved in gambling at all,” Pomrenke said. “That is something that previous generations would’ve found unthinkable. Willie Mays and Mickey Mantle both got punished by the commissioner, Bowie Kuhn, in the late seventies, early 80s for associating with sportsbooks. And they weren’t really doing any more than athletes today. They were basically serving as celebrities. They were doing meet-and-greets. It wasn’t a full-time job for either of them. But they got harshly punished and it was definitely a very different era back then.”

The majority of MLB teams have yet to announce a sports betting partner. They’ll get there when they’re comfortable and it’s worth their while. Players are another realm. They’re not likely to waste an opportunity hard-won in a CBA negotiation, however these ‘restrictions’ are codified. But North American gambling operators have tended to view regulatory developments in the mature European market as a cautionary tale for their future. And just this week, the United Kingdom’s Committee of Advertising Practice set rules banning licensed gambling operators from using as endorsers “top-flight footballers and footballers with a considerable following among under-18 audiences on social media.”

Taking on these types of endorsements will be fraught with potential problems for players anyway. Former NBA player Charles Oakley called it a “trippy slope” and added, “Maybe they should have more retired players than players who are playing.” Cleveland Cavaliers forward Kevin Love said bettors reach him on social media to thank or blame him for the results of their bets.

Betting on baseball has always been popular.The means have changed. And in more than 30 states, the legality. Owners understood the scope of illicit betting in their ballparks long before they decided to make examples of the 1919 White Sox. There were often sections set aside in ballparks where gamblers assembled and awaited customers during games.
The enterprise continues now, but through modern means following the repeal of the Professional and Amateur Sports Protection Act in 2018. Betting is available via mobile in 11 major league ballparks and numerous teams – including the Cubs, Diamondbacks, and Nationals – are in some stage of building sportsbook on their ballpark footprints.
“We’re definitely looking at kind of past is prologue here because we are seeing that today you can go to the ballpark and find the Caesars sportsbook area where you can place bets, or obviously you can do it on your phone,” Pomrenke said. “It’s out in the open now. It’s legalized now. You can’t watch a baseball game on television without being bombarded with ads for sportsbooks. It’s all out there now, but it definitely was always popular.”

Bottom line: Endorsing sportsbooks does not equal betting on your sport

Each incremental step MLB and the gambling industry took toward each other since 2018 has conjured some level of sympathy for the Black Sox – who Pomrenke insists were culpable for their actions – and Rose, who has admitted he bet on games as a player and manager, and was in 1989 banned from baseball and later from entry into the Hall of Fame.
But the distinctions between the Black Sox and Rose and a baseball player eventually endorsing a sportsbook could not be more plain.
Eight members of the 1919 Chicago White Sox conspired to throw the World Series and Rose bet on games. Both are expressly, undeniably forbidden by the rules of baseball that existed then and now.

“You have to draw a distinction between an endorsement deal and actively gambling on the games you’re playing, because that has never been allowed,” Pomrenke said. “That’s always been a dividing line. It’s not the same at all.

“None of that is going to allow Aaron Judge to bet on Yankees games. That’s not going to happen. And the fact that it’s all now wide open and legalized and regulated is going to actually make it even harder for an Aaron Judge or some other active player to really participate.”
Atlanta Falcons wide receiver Calvin Ridley received an indefinite ban when it was found he bet on NFL games through a legal app while in Florida.

2022 MLB season begins with gambling in the forefront

The lines between fair play and running afoul will resemble the third baseline by the fifth inning. Kind of smudged in places.

While the Aaron Judge in-game bet boost doesn’t seem likely, something will eventually make a purist cringe. Whether that fan with a paper scorecard in lap carries more sway than a bettor seems like a question that answers itself.

“We’re kind of in this Wild West period where anything goes and everybody’s trying to make as much money as they can,” Pomrenke said. “We’re seeing things now that I’m not sure that five years from now, we’re going to see again. There will be some restrictions. There will be a little bit of a cultural shift, I think toward, ‘Okay, well, it’s now all legal, so it’s not a huge deal. It’s just part of sports.’ Now they can start taking a step back, take a breath and say, ‘Okay, well, here’s what this landscape’s really going to look like for the long term right now.”