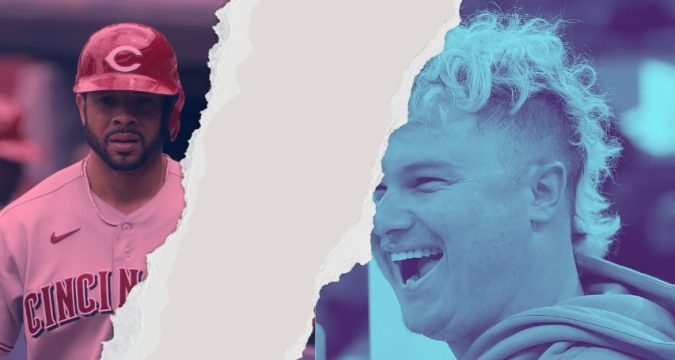 But he said the fantasy football transaction that apparently helped get San Francisco Giants outfielder Joc Pederson slapped in pre-game warm-ups last week and earned Cincinnati Reds slapper-in-question Tommy Pham a three-game suspension was neither out of the ordinary nor out of bounds.

According to Pederson’s legendarily thorough retelling of the tale – complete with GIFs and text messages – Pham was initially angry over Pederson last year stashing an injured player who was listed as “OUT” on injured reserve when he wasn’t officially on the list.

League rules and the website they were using allowed it, and Pham had apparently made the same move with another player previously.

There was a simple and slap-free solution

Agbetoba’s assertion isn’t ground-shaking to any fantasy football player who’s attempted to use the IR as a taxi squad for a few weeks. But his option has weight considering his recent participation in and domination of the high-dollar Fantasy Football Players Championship leagues.

He plays with money on the line, too. As in a half-million dollars.

Did Pederson do anything wrong?

“But I have to think this was not an isolated event. It rarely is. If it’s just putting a player who is ‘out’ in an IR spot, then I think most would just get a consensus league vote to ‘change’ or ‘fix’ the loophole. But again, there has to be more here.”

Nailed that. Pham was also smoldering about a text Pederson sent in a league chat poking fun at the struggling Padres. Several members of the fantasy league were Padres and part of the chat, Pederson said.

“We had too much money on the line, so I look at it like there’s a code. You’re f—ing with my money, then you’re going to say some disrespectful s—; there’s a code to this.”

The fantasy part of the kerfuffle has led to great debate and probably some notes-to-self for league managers heading into the fall. Check those default settings! ESPN fantasy football icon Matthew Berry declared himself “Team Joc” in the dispute.