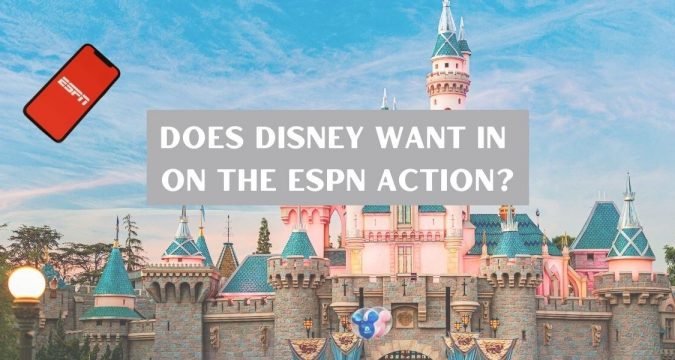 Disney CEO Bob Chapek has thrown the sports betting world for a loop over the past week after his comments made it seem like Disney was working on a sports betting app. Speaking at D23, Disney’s yearly fan expo last week, Chapek indicated Disney wants to give its younger demographic a way to bet on sports.

“Sports betting is a part of what our younger, say, under-35 sports audience is telling us they want as part of their sports lifestyle,” Chapek said this past weekend in Anaheim. Asked if the company was developing an ESPN sports betting app, Chapek said: “We’re working very hard on that.”

Chapek’s comments seemed to indicate that Disney and ESPN are already full steam ahead on this plan. However, Chapek later backtracked during a CNBC “Squawk on the Street” segment.

This week, Chapek went on the CNBC segment to clarify what he meant when he said the company was “working very hard” on sports betting.

The Disney boss put the concept of sports betting in the larger context of Disney wanting to build a metaverse-style ESPN sports experience that focuses on customization and storytelling.

“It’s all about how to use technology…to advance the storytelling, advance the integration so that instead of it being a lean-back experience, it’s a lean-forward experience,” he said.

Chapek also made it clear that Disney will never develop a sportsbook, meaning we will likely never see an ESPN sportsbook.

“One of the things [our customers] want is the ability to have a frictionless sports betting potential with not having to have four screens in front of you,” he said. “We as ESPN have the ability to do that. Now, we’re going to need a partner to do that because we’re never going to be a book; that’s never in the cards for the Walt Disney company.”

So, while Chapek’s expo comments seemed to point to Disney developing an ESPN sportsbook, his remarks on CNBC said otherwise.

However, it’s no secret that Disney has wanted in on sports betting in some form. At the company’s Fiscal Year 2021 Q4 earnings call, Chapek said Disney has done “substantial research” about how sports betting would impact the Disney and ESPN brands.

“It actually strengthens the brand of ESPN when you have a betting component, and it has no impact on the Disney brand,” Chapek said.

Amid the firestorm that Chapek’s comments created, activist investor Dan Loeb, who owns around a $1 billion stake in the company, suggested in a letter to Chapek last month that Disney should sell off ESPN.

He backed off that comment in a tweet on Sept. 11: “We have a better understanding of ESPN’s potential as a standalone business and another vertical for Disney to reach a global audience to generate ad and subscriber revenues,” he said.

Loeb’s reversal and Chapek’s comments seem to indicate that Disney is circling the wagons around sports betting. An ESPN sportsbook is likely not going to happen, but it’s probable the company will partner with a well-known operator to offer sports betting.