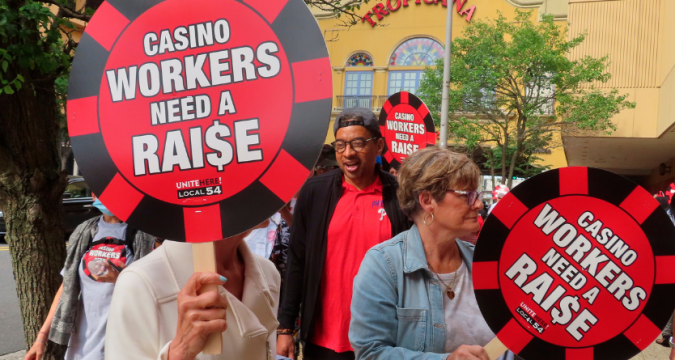 The Unite Here Local 54 authorized a labor action (read: strike) by the end of the month by workers at the Golden Nugget and Resorts casinos. This would cause a major impact on one of the centers of US gambling.

It’s a unique state – NJ online casinos garner a huge amount of revenue, but retail casinos are definitely not insignificant here. These gambling halls, densely packed in a small area (a little bit like the Las Vegas Strip) represent the livelihood of thousands of employees.

The idea of a strike comes a few weeks after workers in the Union were an hour away from striking at five casinos in Atlantic City. Workers and the casinos reached a deal at the last minute on June 30.

“This is just the way it is these days,” said Susan Corey of Cedar Grove, who described herself as a fan of Resorts.

“Workers need to get a fair pay for a fair day’s work and everyone knows the casinos down here are doing good.”

In the just-revealed New Jersey casino revenue report for June, the Golden Nugget showed a revenue of $48.4 million for the month, while Resorts posted $13.8 million for the same time period.

Why are Atlantic City casino workers at odds?

Money. It all comes down to money. Workers are seeking a deal similar to what they got with the managers at the Borgata, Caesars, Hard Rock, Harrah’s, and the Trop earlier this month.

While the details of that deal haven’t been made public, union organizers have confirmed that it included generous pay raises, increased protection for job outsourcing, and reduced workloads for the housekeeping staff.

Michelle DuLucca, a worker at the Golden Nugget, told WHYY.com that a strike is a last resort.

“I think most people….like me really don’t want to go on strike, but we have to try to obtain what everybody else has received.”

Who are the players in Atlantic City?

The Unite Here Local 54 includes around 1,000 workers at both Resorts and the Golden Nugget. Apparently, those two casinos aren’t willing to accept the same deal as their boardwalk brethren. No date for the next bargaining session has been revealed.

97% of the union voted to authorize a strike Tuesday night. While no strike date was formally set, NJ101.5 reported a potential strike date of July 30.

The calendar isn’t on the side of the Union in this case. In the conflict with the other casinos, the workers set an official strike date of July 1, just before the July 4 weekend, one of the biggest tourist weekends for Atlantic City.